Brendan Gaughan charges to lead but finishes fourth at Kentucky

Share All sharing options for: Brendan Gaughan charges to lead but finishes fourth at Kentucky 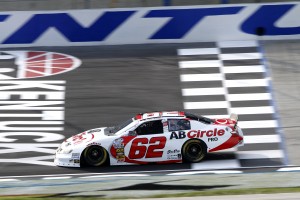 SPARTA, Ky. – Just when it appeared Joey Logano was going to run away with another NASCAR Nationwide Series victory at Kentucky Speedway, Brendan Gaughan appeared at the front of the field.

But almost as quickly, Gaughan lost the lead and had to settle for a fourth-place finish in the Meijer 300.

With 25 laps to go, Gaughan made a terrific restart and passed Logano on the outside.

"I love restarts," Gaughan said. "I’ve always said I credit Ron Hornaday for helping me on restarts. He taught me a lot. I love them. Man, I wish I could have held it longer. Joey is in a league of his own, but I think our Toyota was pretty close."

Gaughan led one lap before slipping in Turn 4 and losing the top spot.

"I was just trying to drive a second-, third- or fourth-place car to first, and I overdrove Turn 3 and 4 and put our Camry up and tried to have to send it to the Gibbs shop for a new body," Gaughan said.
"Fortunately I held on to it. A couple guys went by. My spotter called me clear just in time and we came through and we were able to maintain and still finished fourth for our Camry."