Carl Edwards likes the variety of the NASCAR Nationwide Series

Share All sharing options for: Carl Edwards likes the variety of the NASCAR Nationwide Series 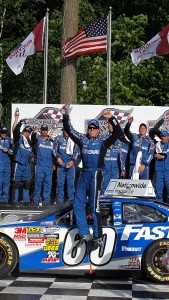 Carl Edwards has celebrated in victory lane 26 times in the Nationwide Series, including for the first time in 2010, Saturday at Road America. (Photo: Jonathan Daniel/Getty Images)

1. Winning. It’s different from winning on Sunday in the Cup Series, but it depends on the race. In that Montreal race last year, I was as excited as I have been for any other win. It just felt good because I was in a battle right to the end, passing Marcos Ambrose on the final turn. In general, those wins are not as difficult as winning in the Cup Series, and usually they’re short-lived victories. Because 24 hours later, you’re in the racecar again.

2. Chasing the points. It’s fun. There’s always some really good guys to battle with. This year, for example, you look at Justin Allgaier, Brad Keselowski, guys who are really coming on strong. We really have some good battles over there.

3. Going to a lot of different racetracks. That’s one of the things I like the most about it. Racing at Gateway near St. Louis is about as good as it gets for me. We added Road America in Wisconsin this year. I’ve had the opportunity to run in Mexico City. That win in Montreal was one of the biggest wins of my driving career because it’s such a unique place.

— As told to Reid Spencer