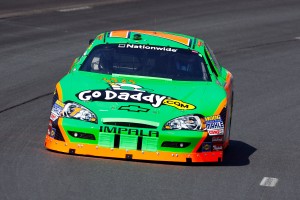 To help prepare her for returning to the Nationwide Series this weekend at New Hampshire Motor Speedway, Patrick got help from one of her JR Motorsports team owners — Dale Earnhardt Jr.

Patrick paid a surreptitious visit to the race track Thursday night and did a ride-around with Earnhardt in a street car in preparation for Saturday's New England 200.

"Well, Dale Jr. took time out of his schedule last night to go around the track for a couple of laps — I don't know how secret this stuff is; he's Dale Jr.; he can go anywhere," Patrick said Friday after Nationwide Series practice. "He showed me the line and gave me tips about running out here, whether it's the race or pitting or whatever, or where to go to help your car do different things. It's incredibly helpful.

"I got in last night after, I don't know … I'm not big like all these guys, and I don't have my own jet. So I flew commercial here — and regretted every minute of it, while I sat inPhiladelphia during the rainstorm and sat there for a couple of hours. I got into the track at like 8 o'clock last night, and Dale took time to do that. It's stuff like that that makes a huge difference for me."

Though Patrick hasn't raced a stock car for nearly four months, she said the absence from NASCAR competition isn't what kept her 43rd of 44 cars on the speed chart in Friday's first practice.

"I really don't notice much of a difference between the first time I get in and the second time, or one weekend after another or four months," said Patrick, who was more than six miles per hour slower than Brad Keselowski, who paced the first Nationwide practice session. "It's bike riding — a bicycle. You get back in it, the feelings are familiar, and that's where you really have to trust your instincts in what you really need in a car and don't make up what's not there.

"It's going to take time, and I'm going to have to learn a lot of this stuff for myself. Even with everyone's help, you still have to feel it. You have to feel it in your gut and your butt and your hands and know for yourself."