Share All sharing options for: Familiarity could give Paul Menard an edge in Nationwide Series race at Road America 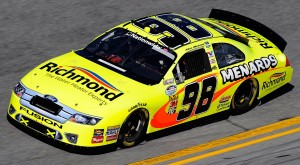 Paul Menard’s experience at Road America should give him an advantage in qualifying and the Bucyrus 200 Nationwide Series race on Saturday. (Photo: Getty Images for NASCAR)

ELKHART LAKE, Wis. — Paul Menard isn’t the most expressive driver in the NASCAR Nationwide Series. But he was downright giddy when talking about this weekend’s inaugural Bucyrus 200 at Road America.

Menard is one of the few Nationwide drivers to have raced — and won — at the 4.048-mile road course.

"The Milwaukee Mile and Road America are two tracks that when I was a kid, my dad would take me," said Menard, a native of Eau Claire, Wis. "I’d watch the IndyCar races and spend the weekend. I was telling some of my guys, I was 8 years old and riding around here on a four-wheeler, watching different corners.

"It’s neat how accessible every turn is. You can go sit in Turn 5 for a while, go back and sit in the carousel, sit there for a while."

Menard said Road America was his favorite racetrack in the country, and with good reason. He won a race in the defunct NASCAR Midwest Series at Road America in 2001.

"To come back here is a neat thing," Menard said. "I haven’t been here in six or seven years, but the track’s just how I remembered it. It’s a beautiful facility. The track’s fast, it’s hard on brakes. We’ll try to manage our tires and brakes. Two-hundred miles on brake pads is going to be a trial, for sure."

Menard and fellow Sprint Cup drivers Carl Edwards and Brad Keselowski will travel back and forth from Sonoma, Calif., this weekend for the Cup race at Infineon Raceway. The three drivers will skip Saturday’s Sprint Cup practice sessions to qualify at Road America, with Bill Elliott practicing Menard’s car in Sonoma.

Despite his experience, Menard was hesitant to say he was the driver to beat this weekend, though he was more than six-tenths of a second faster than the field in the first practice session at the track Thursday.

"I’m just trying to catch Paul," Edwards said. "He’s super fast. I’m glad I get to ride back and forth with him and pick his brain a little bit."

What can Edwards expect to pick up from Menard?

"I know which way the track goes, for one," Menard joked. "Seriously, I know where the corners are, which corner might be a little bit faster than another. But everybody’s so good in this series, everybody’s going to pick up (time in the practice sessions). It’s a competitive series. It’s No. 2 in the world for a reason. It’s got a lot of the best drivers in the world right here."