On the numbers: Kyle Busch hits his marks at New Hampshire

Share All sharing options for: On the numbers: Kyle Busch hits his marks at New Hampshire 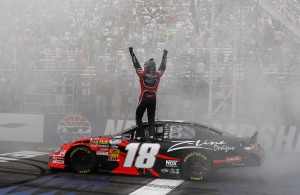 Busch pulled away after a restart on Lap 183, when Joey Logano — in second place at the time — spun his tires and allowed series points leader Brad Keselowski to surge into second place. Busch beat Keselowski to the finish line by 0.644 seconds.

Thirty-four laps earlier, on Lap 166 of 200, Busch led his 91st lap of the afternoon and passed Mark Martin to become the all-time lap leader in the series with 8,083. By the time he had chalked up his sixth win of the year and the 36th of his career, Busch had led 8,117 laps in 186 Nationwide starts.

Busch, who won at New Hampshire last June, is the first repeat winner in 24 Nationwide races at the 1.058-mile track. Tied with seventh-place finisher Kevin Harvick for second on the Nationwide career wins list, Busch needs 13 more victories to pass Martin for the lead in that category.

"That's pretty cool, and it comes after beating one of the best," Busch said of his status as the all-time laps leader. "There's one more record I'm after, and that's the win record—to try to beat him and see how many I can set. … Hopefully, we can get another next week at Daytona — with the new one."

The "new one" Busch mentioned is the new Nationwide car that will make its competitive debut July 2 at Daytona International Speedway. After that, the new car will be raced three more times this year before becoming the full-time car in 2011.

"Driver error — that would be the biggest thing," Logano said of the restart that cost him two positions. "Under caution, I was trying to spin my tires, trying to clean them up. (I thought,) ‘They don't have much motor in these Nationwide cars; I don't think I'm going to spin the tires (on the restart) if I just floor it,' because Kyle beat me the last restart before that. …

"I figured I was going to give it my best shot, and I screwed up and that's what I get — I finished fourth."

Patrick's troubles started earlier when she was racing beside Morgan Shepherd on Lap 6. Shepherd had the inside lane but slid into Patrick's Chevrolet and spun it, damaging the left side of the car.

"It was definitely a long day," said Patrick, who showed her frustration by bumping Shepherd's car lightly on pit road after the race. "It's always tough when you start from behind like that, and to be a lap down so quickly, but, you know, it was a bummer to get lapped so many times, but it was a learning process.

"We were very tight to start with, and we just kept freeing the car up, and it helped. There's a lot for me to learn, how to overcome when the car does push and how to drive the car. I felt like by the end of the race, I finally sort of had a couple of things that I knew helped me out there to keep the car under control, to keep the front end underneath me better, and ultimately just have overall faster laps.

"I did learn out there, but it's frustrating."

The next Nationwide race on Patrick's schedule is July 9 at Chicagoland.