Perfection: Joey Logano goes 3-for-3 in the NASCAR Nationwide Series at Kentucky

Share All sharing options for: Perfection: Joey Logano goes 3-for-3 in the NASCAR Nationwide Series at Kentucky 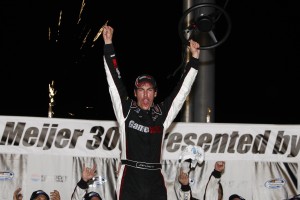 SPARTA, Ky. — A blown call by an umpire cost Detroit Tigers pitcher Armando Galarraga a shot at perfection earlier this month. Nothing, however, could stop Joey Logano in his pursuit of perfection at Kentucky Speedway.

Logano won the Meijer 300 NASCAR Nationwide Series race from the pole Saturday night, giving him three wins from the pole in his three starts at the 1.5-mile track.

"I would never have thought 2-for-2," Logano said. "3-for-3, poles and wins, it’s impressive. I’m pretty stoked about that right now."

Logano led five times for a race-high 106 laps, but the victory was in doubt in the latter stages. Twice Logano lost the lead on restarts, and then Carl Edwards closed on Logano’s back bumper during the final green-flag run.

But Logano held on to win, beating Edwards and thunderstorms that closed in on the Northern Kentucky area. Nationwide Series points leader Brad Keselowski was third, followed by Brendan Gaughan and Reed Sorenson.

"Cool. I guess hard work pays off," Logano said. "I used to come here about once every three weeks when we went testing (Sprint Cup cars) all the time. I had a million laps around this place. I said, ‘Man, if I ever get to race here, I’m going to be pretty good.’ One day I got to race here. It worked out pretty good for me so far."

Crew chief Kevin Kidd predicted a victory earlier this week, not feeling the pressure that comes from working for a two-time defending race champion.

"I told him we were going to win the race. I had no doubt in my mind," Kidd said. "This guy, he knows how to get around this place. When you come into that situation as a crew chief, knowing that as long as we do our job the way we should every week, we’re going to have a shot at it. That’s not really pressure. That’s knowing that, ‘Hey, if you take care of business, you’re going to be in good shape."

Logano was in good shape for most of the race until yellow fever struck with six cautions in the final 66 laps.

The first time Logano lost the lead was with 44 laps to go on a restart when Mike Bliss took the top spot. But after an extended caution period, Logano got back out front on Lap 169 of 200.

The second came when Brendan Gaughan charged around the outside after a restart on Lap 175, but Gaughan slipped off Turn 4 a lap later, and Logano again regained the lead. Logano then held off the late charge from Edwards.