Ricky Viers hopes to move Roush Fenway's No. 16 team up the owners standings

Share All sharing options for: Ricky Viers hopes to move Roush Fenway's No. 16 team up the owners standings 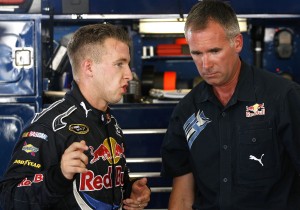 SPARTA, Ky. – Ricky Viers has an eye on the Sprint Cup Series as he moves to Roush Fenway Racing to serve as crew chief of the No. 16 NASCAR Nationwide Series Ford.

Viers worked his final race as crew chief for Baker Curb Racing at Kentucky Speedway on Saturday night and will begin working with Roush Fenway at Road America next weekend.

Viers said he "hated" to leave Baker Curb, which saw its sponsorship from Red Man on the No. 27 Ford end at Kentucky. But Baker Curb officials told him he needed to jump at the opportunity, and Viers did.

"What they have to offer is four teams, several Cup teams," Viers said of Roush Fenway. "I feel like I have the opportunity to go back Cup racing down the road, if that’s available. I’d like to try that one more time. I did it once before (at Red Bull Racing), under adverse conditions. But it was a great experience, I learned a lot. I think if the opportunity comes available again, I’ll be ready."

Viers said his immediate goal with Roush Fenway’s No. 16 is to move it up the owners standings. Colin Braun started the season in the car but has been replaced by Matt Kenseth and Brian Ickler in recent races. Braun is still scheduled for a handful of events in the car, though he’ll share it with other drivers.

Viers guided Baker Curb's No. 27 to eighth in the owners standings, with Greg Biffle and Scott Wimmer driving. Roush Fenway's No. 16 is 23rd in owner points, moving up five spots with Braun's 10th-place finish at Kentucky Speedway.

"My agreement when I came here to Baker Curb was to work through June when this sponsorship ended and after that, we’re reevaluate it," Viers said. "During this last couple of weeks to month, we’ve had several conversations about what’s out there and what’s available. When the opportunity became available and brought to my attention, I had to sit down with them and tell them. They said, ‘We want you to go because we don’t have anything.’"

Working with multiple drivers is nothing new to Viers, who crew chiefed in a similar situation at Richard Childress Racing several years ago.

"I’ve done that before at RCR, working with Harvick and then Johnny (Sauter) and Clint (Bowyer) and Brandon Miller," Viers said. "It’s not that unusual to do that. I felt like I could bring those rookie drivers along and use the same type of setups we did with Kevin. It’s a good baseline. It’s a good way to get to the race track and get started, and then tune around that particular driver.

"I’m hoping I can use that same experience over there."