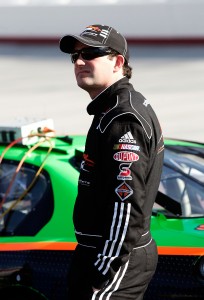 With sponsorship up in the air, Baker Curb likely can’t bring Wimmer back in the No. 27 Ford. Saturday’s finish was his second seventh and his third top-10 in five races with two different teams. But he’s again looking for work.

"I’m done," Wimmer said. "I’m going back home to Wisconsin and work on my race track a little bit up there. I’ll just keep calling around, hunting around. I could probably drive some stuff, but I’m only interested in driving in things I can run in the top 10 and lead laps with.

"This is my fifth race this year, and I think I’ve led in all five races. I want to keep that streak up. If I can run five more races and lead them all, that’d be a great season for me."

Wimmer lost a lap early in the race when he thought he had a tire going down, but he later got the free pass back on the lead lap.

Then, with storms headed toward the track, crew chief Ricky Viers kept Wimmer off kept road as they gambled on fuel.

"We needed to do something at the end a little different," said Viers, who worked his last race for Baker Curb. "I knew rain was coming; didn’t know how close it was. I knew if we stayed out, we could lead some and miss some of these wrecks that happen late in the race here. Usually happens here quite often.

"And if we needed to pit, we had an extra set of tires they didn’t. I had a lot of options, and I just felt like it was the thing for us to do to get track position."

And it worked. With a multitude of cautions in the last quarter of the race, Wimmer was able to make it all the way. His tires were going away, and he lost a couple positions in the final laps, but a top-10 was a good result.

"At the beginning of the race, I swore I had a flat right-front, so we pitted under green," Wimmer said. "We ended up not having a flat. I think I just got some debris on my tires. The team did a great job coming back. That was a great race for us."