Who's the man to beat for NASCAR Nationwide Series title? Brad Keselowski - just ask him

Share All sharing options for: Who's the man to beat for NASCAR Nationwide Series title? Brad Keselowski - just ask him 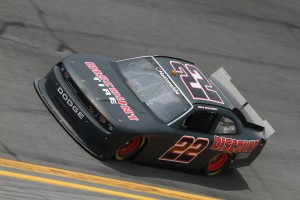 Nationwide Series points leader Brad Keselowski will have a much bigger lead in the standings after Saturday night’s race at Nashville Superspeedway, but he says there are some wild cards on the horizon—the four races with the new Nationwide car. Keselowski tested the new No. 22 Penske Dodge at Daytona last month. (Photo: Motorsports Images and Archive)

GLADEVILLE, Tenn. - Brad Keselowski leads the Nationwide Series points standings a third of the way into the season. And with two of his top competitors dropping out of the title race, is he now the man to beat?

"I don’t see how we’re not," Keselowski said. "I might be missing something."

No, he’s not missing anything. Beginning Saturday night at Nashville Superspeedway, the Nationwide Series heads into its summer schedule, which includes seven races not run at the same track as the Sprint Cup Series. That means second-place Kyle Busch and third-place Kevin Harvick—who aren’t running the full Nationwide schedule—will be out of contention.

And it essentially gives Keselowski a 257-point lead on the drivers running the full season, as that’s how far back fourth-place Carl Edwards stands.

But despite a terrific start to 2010—two wins, nine top-five and 11 top-10 finishes in 12 races—Keselowski isn’t polishing the trophy just yet.

"The wild card is the Car of Tomorrow races," Keselowski said of the four events using the new Nationwide car. "That’s a huge wild card for this series and for the championship. We know that and are trying to prepare accordingly. If we can get through the Car of Tomorrow races, we’ll be really tough to beat. I’m not going to say unbeatable, but really, really tough to beat."

Why? Just look at the numbers, Keselowski said.

"From a performance standpoint, the way that we’ve consistently finished top-five, top-10 all but one week, I just don’t think you’re going to get beat in points doing that," Keselowski said. "The only way you’re going to get beat is if you have those 35th- or 36th-place finishes that come from having a brand-new car and something breaking or falling off of it. That’s part of what makes those wild-card races."

The Sprint Cup Series is at Pocono Raceway this weekend. Busch, who is one point behind Keselowski in the Nationwide standings, won’t make the trip to Nashville for Saturday night’s Federated Auto Parts 300. And neither will Harvick, who is 94 points back.

"I wanted to beat him," Keselowski said of Busch. "As it stands right now, I am beating him. I personally would take more enjoyment and satisfaction out of it if he ran the whole thing, because I think we could beat him. I’m not really disappointed or thrilled because of that. I have mixed emotions about it.

Leading Busch going into Nashville was important to Keselowski.

"That way, there wouldn’t be that naysayer that said, ‘Kyle would’ve won it if he would’ve run them all.’ At this point, I beg to differ."