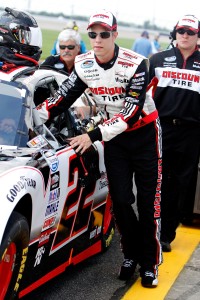 GLADEVILLE, Tenn.—Brad Keselowski was one of four drivers pulling double-duty in NASCAR Sprint Cup and Nationwide Series races this weekend. But Keselowski was the only Cup driver to fly from Pocono Raceway to Nashville Superspeedway for Friday practice.

"It's quite simple: If I didn't come here (Friday), I don't think I would've won the race," Keselowski said after scoring his third Nationwide victory of the season and second of his career at Nashville.

Keselowski came into Nashville with a one-point lead on Kyle Busch, but Busch and third-place Kevin Harvick skipped Nashville and will not run the full season. Keselowski's points lead is now 196 over Busch, with Carl Edwards 277 back in third.

Edwards, Menard and Michael McDowell are also running both Cup and Nationwide races this weekend, but none were in Nashville on Friday.

Keselowski figures he owes it to his Penske Racing team to show up and practice.

"This team works in the shop on days when I'm sleeping in," Keselowski said. "They work, and they work. They work, and I get all the glory. It's my responsibility to know when it's time for me to get to work.

"Sometimes, it's not always the funnest thing to do or the easiest thing to do. There was a lot of travel (Friday), but it makes it worth it to be sitting here right now."

How was Keselowski's appearance Friday the difference? Crew chief Paul Wolfe said competition is so close that any edge a team can gain makes a big difference.

"One thing we did have going for us was this was the same car we ran here in (April), and we were very fast with it (finishing fifth)," Wolfe said. "That helped, but it's down to fine-tuning to win these races, and you've got to be close to perfect. That's where having Brad here to tune into what he thought he was going to need tonight was part of it.

"That's the kind of effort it's going to take, going back and forth. Obviously, that shows Brad's dedication to the series and winning this championship."

Keselowski qualified 24th and slowly worked his way to the front of the field. He didn't get the lead until after the halfway point but led 97 of the final 100 laps. He was one of several drivers to stay on the track under the race's final caution period, and after a brief tussle with Edwards, Keselowski pulled away for his third win of the season.