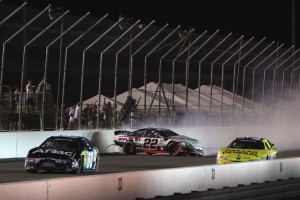 Coming to the checkered flag, Carl Edwards (left) and Brad Keselowski (22) tangle as they battle for the victory during the Missouri-Illinois Dodge Dealers 250. (Photo: Dilip Vishwanat/Getty Images)

MADISON, Ill. — The feud between Carl Edwards and Brad Keselowski — dormant since Atlanta in March — erupted like an angry volcano at Gateway International Raceway.

In a drag race to the finish line, Edwards sent Keselowski hard into the outside wall on the way to winning Saturday night's Missouri-Illinois Dodge Dealers 250 NASCAR Nationwide Series race at the 1.25-mile track. As Edwards took the checkered flag two car lengths ahead of runner-up Reed Sorenson, Keselowski careened into the inside retaining wall and took a vicious shot from Shelby Howard's Chevrolet just short of the finish line.

Less than a lap earlier, Keselowski had bumped Edwards in Turn 1 in an attempt to take the lead after a restart on Lap 199 of 200. Edwards' Ford and Keselowski's Dodge raced side-by-side for most of the final lap. With Keselowski edging ahead as the cars approached the stripe, Edwards turned Keselowski's Dodge, igniting a multicar pileup on the frontstretch.

"I just couldn't let him take the win from me," said Edwards, who drew a three-race probation in March for unabashedly turning Keselowski in a Sprint Cup race at Atlanta, with the unintended consequence of sending the No. 12 Dodge upside-down into the frontstretch wall. "My guys work way too hard for that.

"We had a great restart. My guys built me a great car. We came to the checkered flag, and I hate to see stuff tore up, but we came here to win and he took it from us there in Turn 1. Just an awesome race. ... I'm sure some of them don't like that win — Brad Keselowski fans and stuff — but, man, I just couldn't let him take it from me. I had to do what I had to do."

In Keselowski's view, Edwards action at Gateway was intentional.

"He turned left into me and wrecked me on purpose," Keselowski said. "I gave him the lane, and he still wrecked me. … I figured out a way to beat him. He wasn't happy with me, so he wrecked me. Wrecking down the straightaway is never cool, whether it's at 200 mph or 120. I'm sorry that's the way it had to end."

Keselowski's father, old-school racer Bob Keselowski, had an even stronger take on the finish.

"Brad got into Carl getting out of Turn 1 — racing — they bumped, they rubbed, typical rubbing-racing deal," Bob Keselowski said. "Carl flipped out like he did at Atlanta and tried to kill the kid. I'm sick and tired of this. I'll get my own damn uniform back on and take care of this. He ain't going to kill my boy.

"He just overreacted so bad. If he wanted to bump Brad, it's one thing. But don't drive him through the inside guardrail. Don't put him in the grandstands at Atlanta. That's asinine."

After meeting with Edwards in the NASCAR hauler, Nationwide Series Director Joe Balash attributed the final-lap crash to hard racing.

"I think at the last lap there was a lot of hard racing going on," Balash said. "There was some movement on the race track. It was a tough finish for a really great race.

"We've chatted about this evening, yes. We don't talk about any of those conversations (that we have) in the hauler."

The last-lap crash marred what should have been a triumphant finish at the venue Columbia, Mo., native Edwards considers his home track. Edwards is the first three-time winner at Gateway, and with his second victory of the year and the 27th of his career, he trimmed Keselowski's lead in the series standings from 227 to 168 points in what has become, for practical purposes, a two-man race.