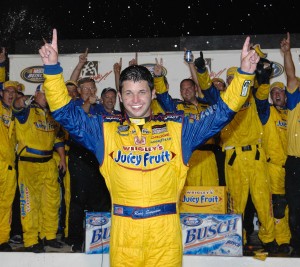 Each driver holds Gateway in high regard, and a victory in Saturday’s Missouri-Illinois Dodge Dealers 250 would produce the series’ first three-time winner at the 1.25-mile track in Madison, Ill.

Sorenson and Edwards are tied with Dale Earnhardt Jr. and Kevin Harvick with two wins at Gateway. Harvick also is in the field; Earnhardt is not.

Edwards is from Columbia, Mo., and raced all over southwestern Illinois and southeastern Missouri in his younger days. He puts Gateway on a pedestal much the way other drivers put Daytona.

"I consider it my home track, and I will have a lot of friends and family there," Edwards said. "I want to give them a great show. We’ve had two big wins there, and no wins have been bigger. Those wins there are as big as any of my Cup wins."

Edwards also has two thirds and a sixth in his six Nationwide starts at Gateway. He made his Nationwide debut there in 2002 and has run several other series at the track, which is just across the Mississippi River from St. Louis.

"I’ve been there in a bunch of capacities," Edwards said. "I’ve always dreamed about going there and running well, and to go there now as a previous winner is cool."

It wasn’t always that way.

"I had to have my buddy come and pick me up with a tow rope with my piece of junk car that broke down when I was leaving that racetrack seven or eight years ago, but also got to leave with the trophy a couple of times, so that’s really special. I love going there, and I’m glad we’re able to go race there. It’s cool."

Sorenson doesn’t have the same hometown attraction as Edwards, but his love of Gateway is just as strong. Two of Sorenson’s three Nationwide victories are at Gateway, and he has four top fives in five starts. He has qualified second four times.

"I’ve been looking forward to this race all summer," Sorenson said. "I grew up racing on short tracks, and although Gateway isn’t necessarily a short track, it’s a fast track for as flat as it is. Gateway just seemed to fit my driving style the first time I raced there in 2005, and it’s been good to me since."