Dale Earnhardt Jr. adamant about not driving No. 3 again

Share All sharing options for: Dale Earnhardt Jr. adamant about not driving No. 3 again 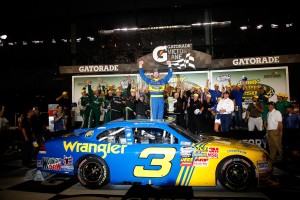 DAYTONA BEACH, Fla. — If there were any doubt about Dale Earnhardt Jr.'s future in the No. 3 Chevrolet, the driver made it abundantly clear Friday night — there is none.

Earnhardt won the Subway Jalapeno 250 NASCAR Nationwide Series race at Daytona International Speedway in what he swears will be his last trip in a car bearing that number. In 2002, Earnhardt drove No. 3 Chevys twice and won once — at Daytona — but the No. 3 Oreos and Nilla Wafers cars he drove then didn't resemble any of the cars his father drove.

The No. 3 Wrangler car Earnhardt took to victory lane Friday night was a dead ringer for the Chevy seven-time Sprint Cup champion Dale Earnhardt Sr. drove for Richard Childress from 1984-1987. The pressure for Earnhardt Jr. to win in that car was overwhelming.

"I will never do it," Earnhardt said after the race, when asked about a return engagement with the No. 3. "I'll never rethink it. I'll never consider it. I think that it's important for everybody to know that that's as concrete as it gets. I'll never do it again. …

"I'd run the number before in this series (including as a Nationwide regular in 1998 and 1999), so I didn't really put a lot of stock in the fact that the 3 was coming back—like a lot of people did. I didn't approach it that way mentally, where everyone else was thinking, you know, 3 is back, Earnhardt's 3 is back.

"But when I started hearing all that, you know, how everybody was making such a big deal about it, I was like, 'Shoot, man, this is like pressure, man. This is a big deal.' So I was a little nervous."