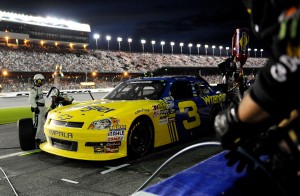 Earnhardt's emotional win was the result of a collaboration between owner Richard Childress, Teresa Earnhardt, JR Motorsports and Hendrick Motorsports, which supplied the engine for the No. 3 car.

In a race that saw the debut of NASCAR's new Nationwide car, Earnhardt held off runner-up Joey Logano and third-place finisher Ricky Stenhouse Jr. in a green-white-checkered-flag finish that took the race two laps beyond its scheduled distance of 100 laps.

"I was so worried that I wasn't going to win, 'cause nothing but a win would get it — for everybody," Earnhardt said after getting hugs from Childress, crew chief Tony Eury Jr. and a multitude of others in victory lane. "If we didn't win, what a waste of time. …

"I worked hard to try to win, not only for daddy — I'm proud of him going to the Hall of Fame, and he would be proud of this, I'm sure — but just all these fans. I hope they enjoyed this. This is it — no more 3 for me. That's it."

With a push from Justin Allgaier, Earnhardt took the lead for the first time on Lap 70, surging past Kyle Busch through Turns 1 and 2. On that same lap, NASCAR called a caution for debris on the backstretch. Pitting under the caution, Earnhardt retained his lead, thanks to a quick, problem-free stop by Earnhardt's No. 88 Sprint Cup crew, which volunteered for the race.

Earnhardt held the top spot through Lap 96, when NASCAR threw a debris caution that set up a two-lap run to the finish. Earnhardt stayed out on old tires, as did seven other contending cars, but Busch, Carl Edwards, Clint Bowyer, Trevor Bayne and Ryan Newman came to the pits for tires under the yellow.

But the day belonged to Earnhardt.

"It's emotional," he said. "I'm proud of myself. I'm proud to have done what I did with this group."

"He just said that daddy would have been happy, real happy," Earnhardt said. "And who would know better than him?"