Danica Patrick admits to feeling the effects of inactivity

Share All sharing options for: Danica Patrick admits to feeling the effects of inactivity 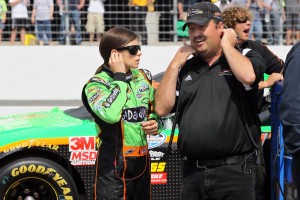 Danica Patrick (left), with crew chief Tony Eury Jr., says she is feeling the effects of her lack of seat time in the Nationwide Series. (Photo: Jim McIsaac/Getty Images)

JOLIET, Ill. — Two weeks ago at New Hampshire, Danica Patrick dismissed the notion that infrequent participation in NASCAR’s Nationwide Series might have a significant adverse effect on her performance.

"I really don’t notice much of a difference between the first time I get in and the second time, or one weekend after another or four months," Patrick said at the time. "It’s bike riding — a bicycle. You get back in it, the feelings are familiar, and that’s where you really have to trust your instincts in what you really need in a car and don’t make up what’s not there."

By the time Patrick arrived at Chicagoland Speedway for her fifth Nationwide event, the tune had changed. Patrick pointed out that other drivers in the series had competed in a full complement of 17 races to her four so far.

"Here I am coming back after a couple of weeks," Patrick said. "It’s harder to be right up to speed with them when they’re in it every week. And just the fact that I still have a lot to learn. I don’t want to make excuses. It’s hard."

Despite wrecking early at New Hampshire, after contact from Morgan Shepherd’s Chevrolet sent Patrick’s JR Motorsports Chevy spinning into the outside wall, the IndyCar Series' most popular driver posted her best Nationwide finish to date — 30th.