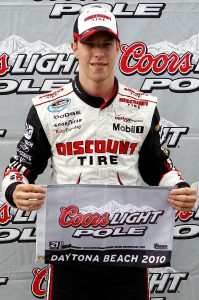 Dale Earnhardt Jr. broke up up the Dodge juggernaut, qualifying third in the JR Motorsports' No. 3 Chevrolet. Penske's Justin Allgaier was third, with Kyle Busch fifth.

Carl Long was the only driver who failed to qualify.