Does the NASCAR Nationwide Series need a Chase, too?

Share All sharing options for: Does the NASCAR Nationwide Series need a Chase, too? 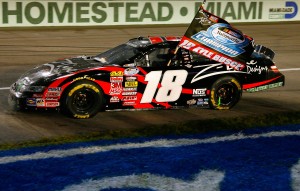 Kyle Busch closed out the 2009 Nationwide Series season with a victory at Homestead and his first NASCAR championship, taking the Nationwide title by 210 points over Carl Edwards. The Nationwide Series champion is still decided over the course of a full season, unlike in the Sprint Cup Series. (Photo: Jason Smith /Getty Images for NASCAR)

Michael Annett: "I would definitely like to see a Chase situation, but it is unfair for the guys that perform well all year and then have a couple of blown motors early on in the Chase and they’re taken out."

Mike Wallace: "I’d actually like to see a two-part championship, where we race half the season for some form of championship and then the final half of the season — not just down to a few races, but let’s race up to mid-July and that gives you a midyear champion. You get rewarded for doing well at the first part of the year, and then you can race on to the real championship at the end."

Jason Leffler: "It seems like our championship is always wrapped up two or three races from the end, so if we could come down to Homestead like the Cup Series with all that excitement, it would be pretty cool. Some sort of playoff series would be great. NASCAR makes a lot of changes to keep up with the times, so you can’t look at the way it’s been in the past. You’ve got to go with what keeps people’s interest."