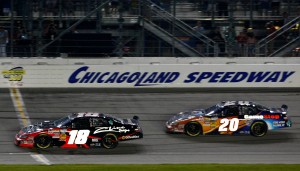 In a green-white-checkered-flag finish that took the Dollar General 300 three laps past its scheduled distance, Busch beat Logano on a restart on Lap 202 and held the lead until a caution for a wreck on the Chicagoland Speedway tri-oval froze the field and made Busch a winner in the series for the seventh time this year.

Busch got a break when series points leader Brad Keselowski ran out of fuel on the final caution lap before the last, abbreviated green-flag run. Keselowski’s misfortune allowed Busch to move to the front of the outside line, beside his teammate.

Busch was able to pin Logano to the bottom of the track and clear Logano for the win. The race ended under caution because the wreck occurred after Busch took the while flag to begin the final lap.

The victory was Busch’s 37th all time, breaking a tie for second with Kevin Harvick for career wins in the series. Rookie Brian Scott ran third, followed by his Braun Racing teammates David Reutimann and Jason Leffler, as Toyotas swept the top five positions.

Carl Edwards, second in the standings, came home sixth and trimmed Keselowski’s series lead from 277 points to 227. Keselowski finished 21st, one lap down.

Busch said he likely would have finished second at best, had Keselowski not run out of fuel.

"I don’t think I would have had a shot to win the race," Busch said. "It was going to take too much to get alongside of Joey, had the restart gone with Keselowski in place. … I couldn’t make the third lane work around the outside.

"I probably could have run second, legitimately. But the way it turned out, I didn’t have to deal with the 22 (Keselowski). Apparently, those Dodges make good horsepower, but they suck a lot of fuel."

Logano, who won last year’s Nationwide race in his first start at the track, said he would have chosen the inside lane whether it was Keselowski or Busch lining up beside him.

"He did what he was supposed to do," Logano said. "He drove down in the turn and got me loose. He beat me. I’m embarrassed more than anything else."

Busch, who led a race-high 110 laps, took the lead for the first time on Lap 10 and dominated the race — despite a pit-road speeding call that required a pass-through penalty under green — until NASCAR threw a caution for debris in Turn 2 on Lap 141.

Logano took the lead on the subsequent restart on Lap 148 and remained out front in clean air.

"It’s over," Busch moaned on Lap 172, trailing Logano by nearly a second. "There ain’t going to be another caution. The freakin’ race is over."

As it turned out, Busch was wrong. NASCAR called a caution for debris on Lap 185, and Busch pitted for four tires and a track bar adjustment designed to loosen the handling of his Toyota. He got his chance to win the race when Trevor Bayne slammed the Turn 1 wall on Lap 196.