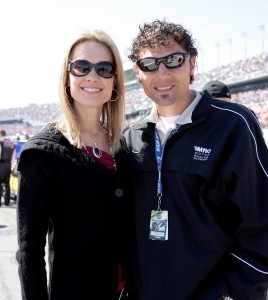 The NASCAR Nationwide Series loses one of its long-time members this weekend, as the Gateway International Raceway Missouri-Illinois Dodge Dealers 250 will be his last race.

No, it’s not a driver. And it’s not a car owner, crew member or sponsor.

Clouse is leaving MRO after 12 years with the organization, including the last four as chaplain in the Nationwide Series. Clouse has become as an important figure in the garage as any driver, crew chief or car owner, though he receives little fanfare – not that he wants it, anyway.

Clouse is leaving MRO to join Back2Back Mexico, a ministry that helps abandoned and neglected children of Monterrey, Mexico. Clouse and his family – wife Angela, daughter Alonna, 10, and sons Brayden, 8, and Layton, 5 – will receive training at a Back2Back orphanage in Monterrey for a year and then run another orphanage in Mexico.

He will be greatly missed as a chaplain in NASCAR.

"Lonnie’s been incredible," Nationwide Series driver Trevor Bayne said. "The sad thing is we didn’t really get the chance to work together until right before his announcement that he’s leaving. I just started getting really involved in MRO.

"And since I’ve gotten to know him as a person, it seems like his messages have meant a lot more to me. Just knowing the kind of guy he is, he’s just not up there talking and reading something somebody else wrote. It’s coming from the heart. We’re going to miss him, for sure."

Bayne has been part of a small Bible study among several Nationwide drivers than Clouse started recently. Also in the group is Michael McDowell, Ricky Stenhouse Jr., Eric McClure and Justin Allgaier.

"Lonnie is great at what he does, and we hate to see him go. We really do," Allgaier said. "But he got a calling from God that most of us would probably have said, ‘Not a chance in the world. There’s no way I’m going to go.’ But it’s great to see (him doing it). We support Lonnie and whatever his future holds. We’re going to miss him we really are.

Clouse’s legacy will be long-lasting in the series, as he has ministered to many in the Nationwide garage, from drivers to crew members to media members. His first eight years with MRO were spent leading the student ministry, meaning he got to know several sons and daughters of drivers.

"When Lonnie started, I was 13," Pressley said. "He was a really cool guy. You’d never know him as a grown-up. I’ve always said he was my best friend. He and I talk on the phone once a week, and if I ever have any problems, he’s the first one I’m calling."

Pressley was one of several in the NASCAR community that have been on mission trips with Clouse, including one to the orphanage in Monterrey in January. That was a life-changing trip for many involved, including Clouse.

"It was an amazing trip," Pressley said. "So many good things happened. I saw kind of a twinkle in Lonnie’s eye the whole time there, so I figured something was up."

Yes, there was. Clouse has been touched by the needs of the orphans there and answered the call to serve them.

"We’ve been at MRO for 12 years, and I wouldn’t trade a minute of it," Clouse said. "God’s used it to help form us and shape us and make us into who we are now. We just felt like it was time to move on. It’s not something where I was, ‘I’m done with this, let’s move on.’

"Now, as far as the (MRO) ministry goes, it was probably at the pinnacle, as far as what God’s doing right now. And if you have a choice, that’s when you want to leave something, when it’s going awesome. You can hand it off to someone else."

That someone else obviously has large shoes to fill.

"The one thing I love about Lonnie is he’s all for God," Allgaier said. "There’s nothing about him that’s for himself or for anything else. He’s all about God. There’s not many people like that that you come across. It’s great to know him as a person, let alone be able to study under him."