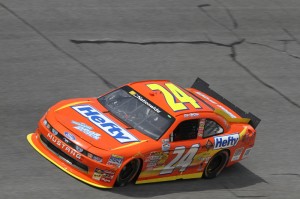 After more than three years of work, countless hours in the wind tunnel, millions of dollars spent by teams and manufacturers and numerous on-track tests, the new NASCAR Nationwide Series car debuts this weekend at Daytona International Speedway.

The Chevrolet Impala, Dodge Challenger, Ford Mustang and Toyota Camry usher in a new era in the series, an era NASCAR hopes creates a new identity for the Nationwide Series, as well as improves safety and decreases cost over time.

The Subway Jalapeno 250 is the first of four races for the new car — don't call it the "car of tomorrow," NASCAR insists — in 2010, with a full implementation next year. Many Nationwide Series teams fought the rollout of the car, and NASCAR backed off initial plans to use the car full time this season.

But after grumblings and complaints about the costs of the switchover, 44 cars are entered for this weekend's race, one more than a full field.

"We think it's very, very important for the Nationwide Series," Nationwide Series director Joe Balash said. "We've been working on that project for a number of years now to try to put together what we feel is the best package to move the series forward, to continue to help us in all our safety aspects and to continue to tighten the competition on the racetrack. And that car is basically the formula that we put together to do that. We're pretty excited about that launch in Daytona."

The chassis is based on the Sprint Cup version of NASCAR's "certified chassis," with a few modifications. NASCAR has said more than half of the Nationwide chassis certified in its research and development center have been converted Cup cars.

Since the new car is more tightly controlled than the older car, NASCAR hopes teams will need fewer chassis in their fleets. Also, since variations of the new car are smaller, the field eventually could run closer together.

"We were worried about falling behind some of the Cup-affiliated teams," Braun Racing's Jason Leffler said. "But I think that the playing field is pretty level, which is going to be a help to us."

As for the race itself, drivers and teams face some unknowns. At a two-day test at Daytona in May, only about half the field showed up, and the largest draft pack was a little more than 20 cars. Drivers reported the cars being a handful, though crew chiefs and engineers worked to get them to handle better.

"The complaints of the (Cup) COT when it first came out were how tight it is so they took that, they fixed it for the Nationwide car now, and it's pretty unbelievable," driver Trevor Bayne said. "I think the Daytona race is going to be a lot of crazy stuff happening just because they are so free.

"We were looking at our data from the test and we had more wheel to the right than I did to the left sometimes, but they're fun to drive and I think it's going to go back to making the cars handle rather than just go fast even at those superspeedways. They're still easy to adjust, so I think it's going to be good racing."