No controversy: Kyle Busch holds off Carl Edwards for eighth Nationwide win of 2010

Share All sharing options for: No controversy: Kyle Busch holds off Carl Edwards for eighth Nationwide win of 2010 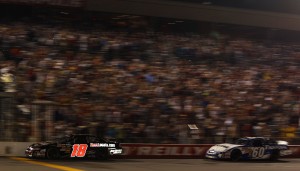 CLERMONT, Ind.—This time, there was no controversial finish.

For the second NASCAR Nationwide Series race in a row, Carl Edwards went side-by-side for the lead on the final lap. But Saturday night at O'Reilly Raceway Park, Kyle Busch held Edwards off to win the Kroger 200 at the 0.686-mile track—his eighth victory of the 2010 season.

This time, Edwards raced Busch cleanly, and Busch grabbed his 38th career Nationwide Series victory, second only to Mark Martin on the all-time win list. Martin has 48 wins in the series.

Busch said the thought of Edwards roughing him up for the lead on the green-white-checkered did enter his mind, and he did all he could to avoid trouble.

"You're so vulnerable running the top side like you do here that people can dive-bomb you on the bottom and slide up into you. I knew it was there, but if I could just keep enough momentum and just keep my car rolling, then I felt like any time he'd lay a bumper to me, he'd get sideways, too," Busch said. "... Carl was right there. He could've used me up more than he did, but it could've cost us both time instead of him just being able to get by. You've got to have a really, really methodical way of going (around) it here. There just wasn't enough time for him to do it in two laps."

As it turned out, Edwards, who lost 60 points and is on probation for the rest of the season as a result of last week's actions, wasn't about to put the leader in jeopardy this week.

"I wasn't going to move Kyle out of the way," Edwards said. "I inadvertently got into him just a little off of (Turn) 4 one time. Fortunately, it didn't cause damage to either of our cars. But, no, I couldn't move him out of the way. We've raced really well together. We've had one of the best races I've ever had in my life last year here (Edwards came from 42nd starting postition to beat Busch). This probably feels like a better race to him because he won, but the one I won last year, that was one of the coolest races I've had. It seems like we've really raced well together the last couple years, and I enjoy that."

Edwards and some others on the lead lap pitted for fresh tires on Lap 162, with Edwards restarting 11th with 28 laps to go. Edwards sliced through the top 10 to get to second, and a caution came out with six laps to go.

"I thought it was an opportunity, but (Busch) got me on the restart. His tires were 30 laps older, and somehow he was able go as fast as he was going," Edwards said. "I think if we didn't get the caution, it was going to be really interesting with lapped traffic. But my hat's off to those guys.

"We didn't have any chance of winning that race without those new tires. (Crew chief) Drew (Blickensderfer) took the tires, and it gave us a shot to win. I can't complain about that."

"It was good, hard, clean racing," said Busch, who led four times for 144 of the 201 laps. "That's what happens when you race guys cleanly over time and race each other with respect—you get respect back."

Ron Hornaday, who won Friday night's Camping World Truck Series race here, ran in the top five for most of the race until he and the lapped car of J.C. Stout got together in Turn 2 on Lap 161.

"Lapper just turned left," Hornaday said after he drove his damaged car behind the wall.