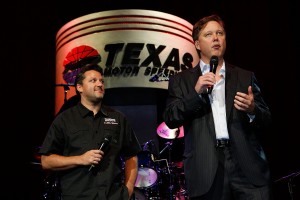 NASCAR Chairman and CEO Brian France (right) and two-time Cup champion Tony Stewart were part of the festivities Tuesday night at House of Blues in Dallas for the announcing of Texas Motor Speedway's 2011 schedule. France told Sporting News the Nationwide Series would not implement a Chase-style playoff to determine its champion. (Photo: Tom Pennington/Getty Images for Texas Motor Speedway)

DALLAS — NASCAR is considering changes to the Nationwide Series that could make full-time Sprint Cup drivers ineligible to win the series championship, but a Chase format for NASCAR’s Triple-A division is not under consideration, said Brian France, chairman and CEO of the sanctioning body.

"We have four national divisions, and we’ve got to distinguish them," France said Tuesday night at a Texas Motor Speedway 2011 schedule announcement. "I think making too many things that would not differentiate them wouldn’t be good.

The Chase for the NASCAR Sprint Cup determines the champion of the NASCAR’s top series. The top 12 drivers after 26 races are eligible to win the championship. It is determined by their performance over the final 10 races of the season.

France did outline the need to balance the participation of Cup drivers against the desire to highlight the accomplishments of full-time Nationwide competitors.

"I think you’re going to see some work in that area on our behalf to change the way we reward the Cup drivers who are involved in the Nationwide events," France said. "We are not altogether certain of how. … Obviously, we’ve got a number of ideas—just which ones we’ll use, I’m not sure."