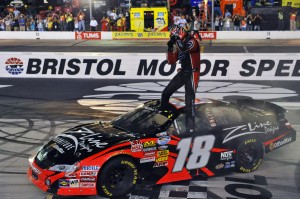 Two days after winning the Camping World Truck Series race at Bristol Motor Speedway, Busch went to victory lane in the Food City 250 to match the single-season record for wins in the NASCAR Nationwide Series.

And Busch did it after a dustup with Keselowski, the Nationwide Series points leader.

Keselowski held the lead before Busch caught him as the two raced side-by-side for six of seven laps late in the race.

Busch slid by Keselowski off Turn 2 to get the lead on lap 219 of 250, but Keselowski got in the back of Busch’s No. 18 Toyota. In Turn 4, Busch paid Keselowski back by spinning out the No. 22 Dodge.

"I raced him, raced him, raced him for 12, 15 laps," Busch said. "I thought I had him cleared, and I moved up in front of him, and instead of him doing a Dale Earnhardt crossover move, he decided that he’d run in the back of me and put me in the fence.

"That’s Brad Keselowski. I went down in the next corner and dumped him. He does it to everybody else. Why can’t I do it to him?"

Keselowski said he was going to get to work on "beating his ass."

"Just hard racing, man, going for the win," Keselowski said. "He got a great run through 1 and 2 and did a good job. He got up and almost cleared me. He kind of took it for granted that I would lift and let him in line, and I didn’t. That’s his right. I’m not going to sit here and complain about it. We’re going to go to work and try to beat him next week and the week after and every other week."

Busch goes for an unprecedented sweep of all three NASCAR national series races in the same weekend in Saturday’s Irwin Tools Night Race at the 0.533-mile short track.

Jason Leffler scored his best finish of the season with a second-place result, with Elliott Sadler third. Dale Earnhardt Jr. made a remarkable comeback from a lap down early in the race to finish fourth, with Carl Edwards fifth.

Bowyer was the leader on lap 157 when two cars got together in front of him. Mike Wallace slowed to miss that wreck, and Bowyer got in the back of Wallace’s car. Bowyer’s crew repaired the No. 21 Chevrolet, and Bowyer rallied for a top-10 finish.

Kasey Kahne took a wild ride early in the race, sliding with two wheels on top of the outside wall all the way through Turn 1 after contact with Justin Allgaier on the frontstretch. Kahne was uninjured.