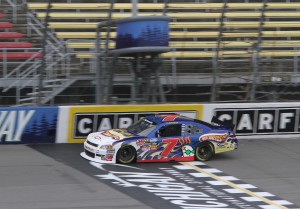 BROOKLYN, Mich. — It was a far cry from Daytona last month, where drivers were screaming "loose" during the testing for the new Nationwide Series car.

The new car will get its second test in competition this weekend — and its first on a downforce race track — in Saturday’s Carfax 250 at Michigan International Speedway.

Unlike at Daytona, drivers participating in Thursday’s extended practice for the new cars generally found the handling conditions to be tighter than expected.

"This morning we started with just a few cars getting out early, and then more cars kind of joined in as the morning progressed," Nationwide Series director Joe Balash said. "Walking through the garage and talking with some of the drivers, we have a good feel for the car. The balance is good on the cars. I think probably the majority of the garage started maybe just a tick tight today."

Driver Trevor Bayne, who was ninth fastest in the second session Thursday afternoon, said his experience differed from the consensus, but he was grateful for the opportunity to get a feel for the new car.

"Most of the people I talked to, surprisingly, a lot of them said tight," Bayne said. "A lot of them are fighting tight (handling) actually, and I didn’t think that was going to be an issue at all. My car is actually a little bit free, but it’s nothing like Daytona. This is a way better experience, and they’re actually a lot of fun to drive.

"I’ve had a good time all day, trying to get a feel for it, how much these cars can rotate and get used to that side force and that limit. I think these (Sprint) Cup guys have a little bit of feel for what these cars can handle, and that was the biggest thing I had to go through all day, just getting used to that rotation into the corner and letting it hang out a little bit more."

The new Nationwide car, which will have raced four times this year (at Daytona, Michigan, Richmond and Charlotte) features more aerodynamic drag than the car it will replace next year, when the new car becomes the series’ full-time racecar.

Side pieces on the rear spoiler, shaped vaguely like Mickey Mouse ears, provide a degree of adjustability.

"We’re basically in the same gear that we were with the other car," Balash said. "This car does have more drag built into it, and that was the intent of the car, to do that, to have a stepping stone in drag over the current Nationwide car.

"One of the things I have seen that’s been noticeable on the cars is there’s been a number of teams making adjustments on the car by using the ear pieces on the rear spoiler. That’s one of the things that we gave to the teams with the new Nationwide car to make some adjustments, and I think we’ve seen a lot of teams taking advantage of that."

"It doesn’t handle a drastic amount different, but it’s really hard to compare," Keselowski said. "The track has obviously had another year of age on it and lost some grip, and I’m not sure exactly how the tire compares as well. … We really still won’t know until we get a full tire run on the car in real race mode."