Share All sharing options for: For Kyle Busch and Joe Gibbs Racing, No. 61 equals No. 1 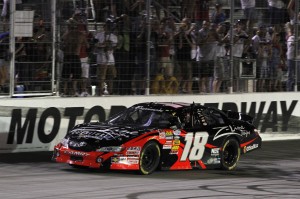 BRISTOL, Tenn. – The Joe Gibbs Racing chassis that Kyle Busch used to win Friday night’s Food City 250 NASCAR Nationwide Series race at Bristol Motor Speedway is on quite a roll. Chassis No. 61 from JGR’s Nationwide shop has won eight of the last 10 races it has entered, including the last four in a row.

"I think I want to gold-plate that thing at the end of the year," crew chief Jason Ratcliff said.

"No you’re not," Busch said with a smile.

Chassis No. 61 was built in 2007, and Brad Coleman drove it to a second-place finish at Kentucky that year. Busch won with the car for the first time at California in 2008, with Denny Hamlin winning at Kansas and Busch at Texas later that year.

Also in 2008, Busch crashed it on his second qualifying lap at Las Vegas, and Hamlin failed to qualify with it at Darlington when he hit the wall in qualifying.

"This car has won now that a half-mile, a three-quarter mile, a mile, a mile-and-a-third, mile-and-a-half – I don’t think there are any mile-and-three-quarters, but it’s won at a two-mile race track as well," Busch said. "So, it’s won everywhere. This baby, it’s an awesome race car."

It’s won on every type of track but a speedway and road course, Ratcliff said.

"It’s the oldest car we have in the shop," Ratcliff said. "We’ve had it since 2007. Every time we show up with this car, we’re looking for great things to happen. It’s won a lot of races, but it’s also had a lot of front and rear clips on it, too."