Jason Leffler bounces back to finish third at Iowa Speedway

Share All sharing options for: Jason Leffler bounces back to finish third at Iowa Speedway 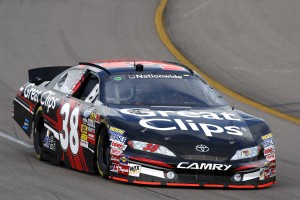 Braun Racing had three cars smack the wall after problems with tires/brakes in the U.S. Cellular 250 NASCAR Nationwide Series race at Iowa Speedway. But the fourth Braun driver, Jason Leffler, sailed merrily along to a third-place finish.

Teammate Tayler Malsem had problems, too, but Leffler ran well the entire night – a stark contrast to last weekend’s race at O’Reilly Raceway Park where the No. 38 Toyota was torn up as the green flag waved.

"The guys did a great job," Leffler said. "(Crew chief) Eddie Pardue and the boys did a great job all day. We’ve had good cars the last couple of weeks and we’ve had nothing to show for it so I’m happy for them. They can be proud of that. The Great Clips Camry was really good."

Leffler said he was no match for race winner Kyle Busch at Iowa, but then again, who has been a match for Joe Gibbs Racing?

"We ran really good," Leffler said. "It’s hard to run with the 18 (of Busch). At times we could run with Kevin (Harvick), but the 18 and the 20 (of JGR), they’re in their own time zone for the last couple of years. So, you’ve got to be close to them if something happens and that’s what we try to do every week in and week out. My guys do a really good job for what they have to work with and I’m proud of that. We just try our hardest all of the time."