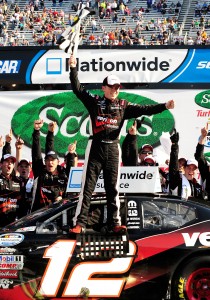 As Justin Allgaier drove to Bristol Motor Speedway for Friday night’s Food City 250 Nationwide Series race, two feelings dominated his thinking. And they are on opposite ends of the emotional spectrum.

On the one hand, Allgaier is supremely confident racing on the .533-mile short track because he won his first NASCAR race there in March.

"I feel like for me, going back to Bristol is something that from the day we left until now, I’ve been dreaming of this day," Allgaier said. "It’s such a cool race track, and to be able to get our first win there was awesome."

On the other hand, Allgaier is disappointed because he hasn’t won since. Allgaier, 24, seemed poised to reel off several victories and compete with his more experienced Penske Racing teammate, Brad Keselowski, for the Nationwide title.

"I spent all last year, and I didn’t get a win, and I wanted one really bad," Allgaier said. "It didn’t seem like it was that long of a time, though. Ever since we won earlier this year, from March to today has felt like five years of not getting into victory lane. It has been disappointing. I’ve obviously wanted to get back into victory lane."

That’s the curse and blessing of winning. When you win, you clearly feel good, knowing you can do it again. And then you want to win again ... and again.

"That’s nothing against our guys," Allgaier said. "We just hit so right that day that it probably elevated us a little bit more than what we were."

Still, Allgaier sees his team getting better, and with Bristol and some other good tracks for him coming up, another victory could be in the cards.

"Honestly, I put no pressure on myself," Allgaier said. "The way that I look at it is, Bristol is kind of like Daytona and Talladega. One small mistake by one (driver) causes a lot of other people to not get the finish they want. That being said, I feel like every time we’ve unloaded at Bristol at Penske Racing, we’ve been a car that’s been a threat to win a race."