Kyle Busch, Brad Keselowski in their own words

Share All sharing options for: Kyle Busch, Brad Keselowski in their own words 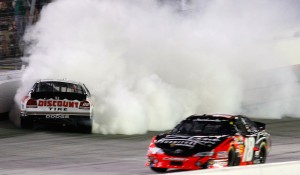 Kyle Busch drives by Brad Keselowski after the two made contact in Turn 4 of Lap 218. Busch won for the 10th time of the season, tying the NASCAR Nationwide Series record held by Sam Ard and Busch (Photo: Geoff Burke/Getty Images for NASCAR)

Do you expect this will just be the way you and Brad race each other?

"Isn't this the way Brad races everybody? I mean, really. It's just the way it is. That's why he got spun out. I pulled a slide job on him off of Turn 2. Maybe I wasn't clear, but I was at one point. All he had to do was turn down to the bottom and try to do a crossover Earnhardt move and pass me in the next corner or even try to pull a slide job on me. And he didn't do it. He just drove in the back of me and put me in the fence. It's Brad Keselowski, so I wasn't too happy about it. I was going to go back after him and spin him out, and I did. Won the race. Good for me."

Some think because he's on probation, people can intentionally wreck him without worrying about payback? Is that accurate?

"I think Brad Keselowski should look himself in the mirror and say, 'I brought this on myself.'"

You're being candid about all this. We saw what happened with Edwards at Gateway. Do you expect to be talked to about this by NASCAR? Do you expect them to come to you and issue you a points penalty, and does that matter to you at all?

"I'm not even going to answer that question. Next."

What happened with Brad Keselowski during the race?

"I raced and raced and raced him and I don’t know for 12, 15 laps and my Z-Line Camry was pretty awesome tonight. The guys did a great job. It was loose, but it was good. I thought I had him cleared on the back and I moved up in front of him and instead of him doing an Earnhardt crossover move he decided that he would just run into the back of me and put me in the fence. So, that’s Brad Keselowski. So, you know, I went down into the next corner and dumped him. He does it to everybody else. Why can’t I do it to him? So, whatever. It don’t matter. Jim and Monica (Sexton) are awesome. I can’t thank Z-Line Designs enough. Toyota, NOS Energy Drink, Marquis Jets, Gillette and Nationwide Insurance for supporting the series. It’s fun to come over here and race and I enjoy it, and of course it’s cool to put this 18 car in victory lane."

"We ran a heck of a race. We got up to the front legitimately. I’m proud of my team for that and then we got intentionally wrecked. It is what it is. We'll go to work and work on beating his (Kyle's) ass.

"Early in the race, I had the lead on a restart and he ran me up the track in (Turns) 3 and 4 and I lifted, gave him the lane there when I didn’t have too. Just being a good guy, because I’m a member of the good guy club. But when the end of the race comes, man you don’t let people in line. They ought to know better than try and take it. That answers it all right there. I’m on probation for racing hard and that allows everyone to intentionally wreck me. We made good moves in the race and worked our way to the front. We had a great car. The fans saw what happened. He’ll get his.

"Just hard racing man. I was going for it. I was on the outside, he was on the inside, and he got a great run through (Turns) 1 and 2. He did a good job. He got up…almost cleared me and kind of took for granted that I would let him in line and I didn’t. That’s his right; nothing to complain about. We’re going to keep working on our Discount Tire Dodge for next week, the week after and every other week."

Did being on probation come into your mindset after the incident with the 18?

"Oh yeah, absolutely. I was certainly aware of it. I just go to work and not let it (the incident) change the way that I drive even after the contact I had with the 18."