Kyle Busch one victory away from NASCAR Nationwide Series record

Share All sharing options for: Kyle Busch one victory away from NASCAR Nationwide Series record 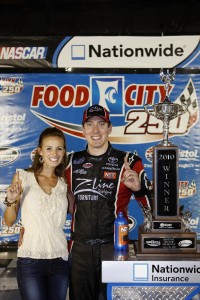 Thorson is a veteran mechanic who chooses not to celebrate with the team after the No. 18 Toyota team wins a Nationwide race. Thorson, though, is coming off the road next year to spend more time with his family, and Busch made Thorson make a promise before the 2010 season ends.

Busch made Thorson promise that he would go to victory lane should Busch break the Nationwide Series single-season record for victories. Busch matched that record in Friday’s Food City 250 at Bristol Motor Speedway and could break it later this year.

"Kevin Grubb, the engine tuner (at JGR), he was with Sam back when Sam won 10 so it’s pretty cool to have him here now," Busch said. "Three seasons he’s been able to do it."

Busch certainly appreciates the enormity of the record.

"It’s pretty awesome," Busch said. "To me, it’s cool to have the opportunity. We’ve got eight, nine, 10 more races left or whatever it is to get the opportunity to do it. Hopefully luck can fall our way and we can get No. 11. No. 11 is going to be pretty special because for one, it’s never been done before."