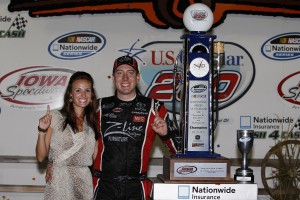 NEWTON, Iowa — Even when he doesn't get any practice, Kyle Busch still wins in the NASCAR Nationwide Series.

Busch won his ninth NASCAR Nationwide race of 2010, his sixth in his last seven starts and 39th of his career by dominating the U.S. Cellular 250 in front of 55,988 fans at Iowa Speedway.

"I really like these cars," Busch said. "It's fun, man. I've really grown accustomed to these things and have learned how to drive them. You can really drive the Nationwide cars hard because they don't have a whole lot of horsepower, so you can really try to make up a lot by being able to get more out of the car, driver-wise."

Busch missed Saturday morning's rain-delayed practice, making it to Iowa from Pocono in time for qualifying. In his first laps in the No. 18 Joe Gibbs Racing Toyota, he earned the second position. Brad Coleman practiced Busch's car.

"It would've been better if I could've sat on the pole," Busch said. "Darn Trevor Bayne."

Bayne may have won the pole, but Busch's car was clearly dominant in the race, even without Busch practicing it. Busch led four times for 209 laps.

"It says a lot about the team, it says a lot about my confidence as a driver and my confidence in the team that they can prepare great racecars—and also (backup driver) Brad Coleman and what he does. I told (crew chief) Jason (Ratcliff) before the start of this thing, 'Man, if I win this thing, I just might not practice any more.' I think I screw it up more when I practice it."

Busch restarted sixth after a pit stop for four tires with 42 laps to go, passing four cars in one lap to move to second behind Kevin Harvick, who changed only right-side tires.

"We got five, six cars in between ourselves and Kyle, and that's really what we wanted to do," Harvick said. "We just didn't expect him to pass them all in one lap. That was our best chance, to try to get in front of him, and hopefully have him get caught up in traffic."

Busch passed Harvick with 24 laps to go and pulled away for the victory, spoiling Nationwide's Dash 4 Cash program. Since Busch was ineligible because he hasn't run all the Nationwide Series races this year, an eligible driver can win $75,000 if he wins at Texas Motor Speedway on Nov. 6.

Iowa's second NASCAR Nationwide race saw two red flags in the first 100 laps. The first red was for Reed Sorenson's wreck in Turn 1 on Lap 42, caused by a melted bead on the right-front tire. The second came 51 laps later, when Brian Keselowski nailed a prone Colin Braun in Turn 2.

Braun, who wrecked his primary car in qualifying, had spun off the corner before getting slammed by Keselowski. Three other cars were involved, but none of the drivers were hurt.

Bayne became the youngest driver in series history to win three consecutive poles as he claimed the top spot for the 250-lap race. Bayne is the fourth driver to accomplish the feat and the first in 18 years. The others were Sam Ard, Jeff Gordon, Mark Martin and Michael Waltrip.