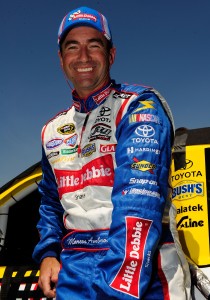 Marcos Ambrose is known for his smiling nature, but he has had his share of heartbreak the last three years at Montreal. (Photo: Getty Images for NASCAR)

Marcos Ambrose was asked if there was an Australian term for "snakebit," which certainly seems to apply to the Tasmanian in NASCAR Nationwide Series races at Circuit Gilles Villeneuve.

"Snakebit would be appropriate," Ambrose said.

But how many wins does he have there? Zero.

In 2007, Ambrose led 37 of the 75 laps until a late-race dustup with Robby Gordon led to Gordon knocking Ambrose out of the lead on a restart. He finished seventh.

In 2008, Ambrose led 27 of the 48 laps in NASCAR's first race run in the rain until he was caught speeding entering pit road because the hard rain made it nearly impossible to see. He finished third.

Last year's race may have been the most heartbreaking. He led 60 of the 76 laps until a mistake on the final chicane let Carl Edwards slip past for the checkered flag.

"That's the way it is," Ambrose said. "You can't beat bad luck. We'll just keep going back up there. Our fortunes are sure to change."

Ambrose insists he is not a glutton for punishment in returning to Montreal, where only bad things have happened to him.

"No, not at all, mate," Ambrose said. "You've got a chance to win, you've got to keep going back. How many times did Mark Martin finish second (in the Sprint Cup Series) before he won? It's the same story. These races are hard to win. And we're only going up there for one reason — all three years we went up there for one reason: That was try and win the race.

"We're there to do it. The competition needs to take us seriously because we've got a lot of ambition this year."

Canadian Jacques Villeneuve, who had similar issues in Formula One in Montreal, said sometimes the problems of the past can get in a driver's head. The driver and team think, "What can go wrong this time?"

But Ambrose said no. The past is the past.

"Races come and go," Ambrose said. "It's a great race, a huge crowd. It's a prestigious race. And I've never won in Canada. If I could win there, I can check another box. I like to win in different countries. It would be fun to do that.

"You can blow it up as much as you'd like. At the end of the day, it's a race that we want to win, we should've won three years in a row. We haven't. There's no point in trying to dig up old memories. We've just got to look forward to this year and focus our energy on positive thoughts and trying to get to victory lane."