Share All sharing options for: Marcos Ambrose makes it three straight in Nationwide Series at the Glen 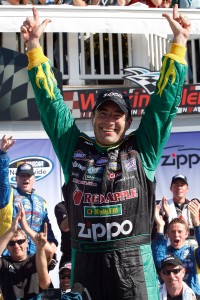 Though his future is uncertain, with his announced departure from JTG-Daugherty Racing for parts — or team — unknown, Ambrose drove immaculately Saturday afternoon in picking up his third straight NASCAR Nationwide Series victory at Watkins Glen International, winning the Zippo 200 from the pole.

During a 16-lap run to the finish, Ambrose pulled away to win by 2.834 seconds over Joey Logano, who, for once, was happy to settle for second place.

"It was a wonderful day for us," said Ambrose, who has not announced plans for next year, though the rumor mill says he's likely to land in a Sprint Cup ride at Richard Petty Motorsports. "We've had our troubles at JTG this year, and we're parting ways at the end of the season, and this is a really fitting way to finish this thing off."

There's also unfinished business. Ambrose will start 11th in Sunday's Cup race at the Glen, hoping to become the first driver to sweep both races at the 2.45-mile road course.

"We've got another job to do (Sunday), so I won't have too many beers tonight," he said.

Ambrose passed eventual fifth-place finisher Kyle Busch for the lead on Lap 41, hanging Busch behind lapped traffic as the cars roared uphill through the esses. By the time Ambrose reached the Bus Stop chicane, he had pulled ahead of Busch and remained out front through a pair of caution periods in the final 30 laps.

Logano surprised himself with his strong performance on the road circuit.

"I was pretty pumped out about how the car ran today," Logano said. "Road courses and me never got along before. It's cool to see yourself improve every time you get to a place like this."

Part of that improvement was attributable to following Ambrose for much of the race. Before a 10-car wreck in Turn 2 caused a stoppage of more than 25 minutes, Logano kept pace with the race winner.

"Marcos is pretty good through the Bus Stop — just watching the line, the curbs he hits, the way he hits 'em, the speed he carries — I definitely learned a lot," Logano said. "I feel like I picked up the most through there and was able to be pretty good by the end of the race."

Note: Keselowski expanded his advantage in the series standings to 327 points over second-place Carl Edwards, who fell out of the race after 25 laps because of an engine failure and finished 33rd.