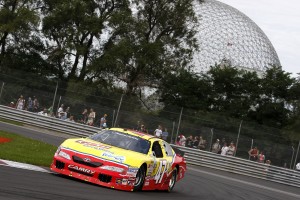 MONTREAL — Marcos Ambrose and Quebec native son Jacques Villeneuve played their own version of "Can you top this" Saturday afternoon, but Ambrose had the last word.

Twice after Villeneuve knocked Ambrose out of the top qualifying spot for Sunday’s Nationwide Series NAPA Auto Parts 200 at Circuit Gilles Villeneuve, Ambrose responded with a faster lap and ultimately won the pole for the race that has eluded him for three years.

Ambrose posted the fastest lap of the session — at 97.079 mph — on the third of his three circuits to edge the former Formula One champion, who toured the 2.709-mile road course at 96.924 mph. Joey Logano qualified third, followed by Carl Edwards, last year’s race winner, Boris Said and Jason Leffler.

Each of the top six drivers broke the previous track qualifying record set by Patrick Carpentier in 2007.

"Ever since I knew what racing was, I saw him come through the ranks," Ambrose said. "The Indy 500 win he had … and, of course, the crossover to F1 — I watched him with envy, wishing I could be him.

"Today, I think he wishes he could be me."

After spinning and dislodging a brake hose on his first qualifying lap, Robby Gordon, one of the prerace favorites, narrowly averted carnage on his final circuit when a groundhog wandered out to the edge of the track just as Gordon was approaching the final corner.

"I almost hit him," said Gordon, who qualified 16th despite the misadventures. "He was right at the braking zone into the chicane."