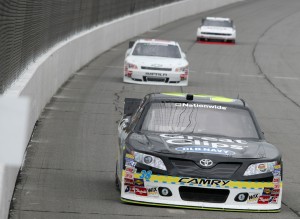 The second race with the new Nationwide Series car has some drivers a little worried.

"I’m actually terrified, to be honest with you," Steve Wallace said. "I think we all are."

Why is Wallace, normally a fearless young race driver, afraid? Because the new car has never been run on a track like 2-mile Michigan International Speedway, site of Saturday’s Carfax 250. The car has been tested at 1.5-mile Charlotte Motor Speedway and ran last month at 2.5-mile Daytona International Speedway.

But it had never seen a track like Michigan until Thursday’s test day.

"We’ve only run our car one time," Wallace said. "We haven’t been able to test it anywhere. We tested it at Daytona, we raced Daytona and we come back and they’ve been sitting on jack stands since then. We’ve been to the seven-post rig a lot. We’ve done a lot of work like that, but as far as on-track activities, we haven’t been able to tweak or tune on these things.

"To be quite honest, we’re just kind of going there with what Toyota has seen on all of the shaker rigs and kind of what they’re recommending. … It’s going to be wild—for us at least."

"Daytona was so different, but it was fun at the same time," Leffler said. "Your adjustments were different and everything you did with the racecar. Everybody is learning, and I think the show was pretty good. I think the new car looks good on the racetrack. It’s something that everybody in the Nationwide Series should be proud of.

"Michigan will be fun. At the same time I can see where Steve is coming from. It would be nice for all of us to be able to test some more and try to get a handle on the things, but we’re all in the same boat. You can’t test so we’re learning as we go and you’ll see a lot of learning going on in the race at Michigan. But it should be fun."

And since no one turned laps at Michigan in the new car until Thursday’s extended practice, it could be an opportunity for someone to take an advantage.

"I’m excited because we’re all blind going into this, pretty much," Justin Allgaier said. "We all want to see how it’s going to turn out. Our car was horrible at Michigan last year. I’m not going to lie. We were way off-base and very uncomfortable. With change brings a totally different setup."