Off the track ... with NASCAR Nationwide Series driver Trevor Bayne

Share All sharing options for: Off the track ... with NASCAR Nationwide Series driver Trevor Bayne 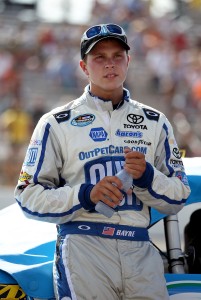 Trevor Bayne, 19, is eighth in the Nationwide Series standings in his second year in the series. (Photo: Christian Peterson/Getty Images)

Sporting News goes behind the scenes — and off the track — with Nationwide Series driver Trevor Bayne:

The best cruising music is … Alternative Christian music. Every now and then in the summer, I’ll put on country.

My average freeway cruising speed is … 70.

When I get a flat … I got one a few months ago. I had two buddies with me, so we pulled over, and we had it done in about 10 minutes — which isn’t bad because we didn’t know what we were doing.

The last time I got a speeding ticket was … for going 80 in a 65 at Bristol, leaving the racetrack.

Hybrids are … Slow. I guess they’re good for us, but to me, it doesn’t seem like something a race car driver wants to drive.

My No. 1 pet peeve with fellow motorists is … the slow person in the fast lane.

The Nationwide driver who would be the most maniacal on the road is … No one’s a bigger maniac than I am.

I wouldn’t be caught dead in … One of the new Volkswagen Bugs with the flowers on the dash.