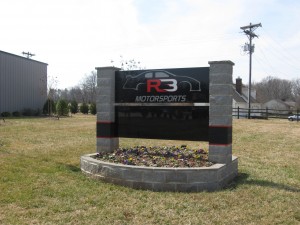 Last week, the Robert Richardson, Sr.-owned team broke ground on a new 14,600 sq. ft. building to go along with their existing shop on Hwy 152. The expansion is being done because they need the room, and are looking to add a second team to their No. 23 Chevrolet for the 2011 season.

Richardson’s son, Robert Richardson, Jr. will remain the lead driver for the No. 23 team, and like in years past, is looking to share driving duties with someone else. The team is looking to add Coleman Pressley as a teammate with him competing for the full NNS 2011 schedule.

"We have great equipment and people on this team," said Richardson, Sr. "We’re not affiliated with a Cup team like a lot of these other Nationwide teams. By expanding our existing operation with the new building, we’ll be able to house a second team to be even more competitive.

"Alex Kennedy has done a great job in the races he’s run for us, and that’s one possibility to split the season with Robert, Jr. in the No. 23 car. We’re building these new-style cars and that takes some solid backing to make it all happen."

R3 Motorsports is in its third season of competition earning more top-15s and top-20s this year than last, with 11 races still remaining in the 2010 season. With a second car, the team can utilize more notes from the race track to speed up their improvement on the new cars.

"The one advantage this team has over some others is that we’re only looking to fund our racing," Richardson said. "We don’t have team jets and motorcoaches; we just want to go racing and have fun. That, and we’re not looking for the kind of money some others are to make it happen.

"We’re affordable, accessible, are offering full and half-season, or multiple-race packages, to partners. We can give the personal service and return to our Marketing Partners they deserve. A race team doesn’t become successful overnight, so we’re working towards next season now."

Anyone interested in becoming a Marketing Partner can call 704-507-1838, or email timpackman@yahoo.com for an affordable alternative to participate in NASCAR racing.

The team is NOT accepting resumes or employment inquiries at this time.