With another top-five, Trevor Bayne continues to impress in NASCAR Nationwide Series

Share All sharing options for: With another top-five, Trevor Bayne continues to impress in NASCAR Nationwide Series 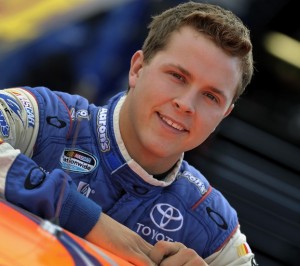 Trevor Bayne continues to open eyes in the NASCAR Nationwide Series, and his run in the U.S. Cellular 250 at Iowa Speedway was as impressive as any the young driver has made in his career.

Bayne won the pole for the third consecutive race, becoming only the fourth driver to do so in the series. Then, he spent much of the first half of the race battling for the lead with Kyle Busch, holding the stop spot for 21 laps.

Even though he faded slightly to a fifth-place finish, that’s his third top-five in a row.

"I learned so much from following Kyle," Bayne said. "He deserves every bit of the credit he gets. He’s in great equipment, has a great crew chief, and he’s an unbelievable driver. That first 50 laps he was sideways the whole time and I followed him up and learned that top groove, how to get the car straight to run off of the corner and get good drive.

"Our car was really free at the beginning, but as the night came on we got tighter and we kept getting tighter and tighter and that’s what really got us at the end. If that thing would’ve ended in daylight we probably could’ve got our first win here. But we’re so happy about these top-fives every weekend. Three poles in a row, I mean, I hear that’s not very heard of so that’s awesome for this Aaron’s Dream Machine team. We’re just as excited as we can be."

The 19-year-old now has four top-fives in his last six races. What’s next?

"Keep doing what we’re doing," Bayne said. "If we stay in the top five I think it’s eventually going to come so we’ve just got to make sure we stay there every weekend and be in position."