Aric Almirola gets jump on 2010 with start at Richmond in JR Motorsports' No. 7

Share All sharing options for: Aric Almirola gets jump on 2010 with start at Richmond in JR Motorsports' No. 7 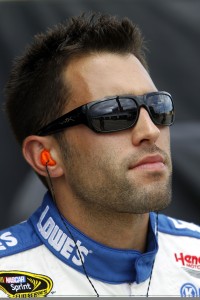 Aric Almirola will make his second NASCAR Nationwide Series start this season with JR Motorsports, driving the team's No. 7 Chevrolet in the Virginia College Savings 250 at Richmond International Raceway on Friday.

Almirola is signed to drive the team's No. 88 full time next year. Elliott Sadler will be in the No. 88 this weekend. This will mark Almirola's first start in the No. 7, with Tony Eury Jr. serving as crew chief.

"Everyone is excited to get a jump on next season," Almirola said. "I’ve ran the No. 88 with (Tony Eury Sr.) before, but this is my first opportunity to run in the No. 7 car with Tony Jr. Although I’ll be with the 88 team next year, this is a great chance to get more familiar with the entire JRM team, and how the whole organization operates."

Almirola finished third in the No. 88 Chevy at O'Reilly Raceway Park. He's made two Nationwide starts at Richmond, with a best finish of 18th.

"Richmond offers some great short track racing," Almirola said. "You can be it’ll be an exciting race for both the drivers and the fans. We want to set realistic goals for this weekend, and knowing the type of preparation and where the 7 car is capable of running, I’m not going to be happy with anything short of a top-10 run."

Almirola becomes the seventh driver of the No. 7 this year, joining Steve Arpin, Landon Cassill, J.R. Fitzpatrick, Danica Patrick, Josh Wise and Scott Wimmer in the car. The No. 7 is 17th in owner points.