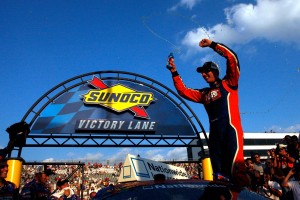 Busch led 192 of 200 laps at the Monster Mile to win the Dover 200 and claim his 11th win of the season, breaking a record he shared with Sam Ard. The victory was Busch’s 41st in the series, his 30th in a Toyota since moving to Joe Gibbs Racing to start the 2008 season and his 81st in NASCAR’s top three series combined.

"It’s very special," Busch said of the record. "Sam is a great individual and was a great driver in his time (early 1980s). For myself to be able to come out and compete at that level and get as many wins in a season is hard enough to do, but then to go out there and beat a record …

"From where Sam Ard was in his day and where we are today, I feel like a lot has changed in this sport, and, of course, it’s always challenging to go out and get a win on a given weekend. But for us to win 11 this year is very, very special to me, and that’s why I say it’s so special to (crew chief) Jason (Ratcliff) and to all these guys on the team, because they’re all part of it."

Despite a vibration that gave him some nervous moments in the closing laps, Busch beat polesitter and JGR teammate Joey Logano to the finish line by .400 seconds, marking the 11th time JGR cars have finished 1-2 in the series.

Logano came home second for the sixth time this season and felt he couldn’t compete with Busch on restarts.

"It took us awhile, as usual, to take off on the restart," Logano said. "I don’t know why. The last few races we just don’t take off on restarts good. We give them a big lead and we try to make that up and that makes it impossible. I think everyone saw in the last few laps there, we were coming. We had a shot at it, just a little too late, again."

Note: Danica Patrick blew a tire and crashed into the Turn 4 wall to cause the first caution of the race on Lap 70. She finished 35th in her seventh Nationwide start.