Share All sharing options for: Forgotten man Erik Darnell out to show he still has it in Nationwide Series 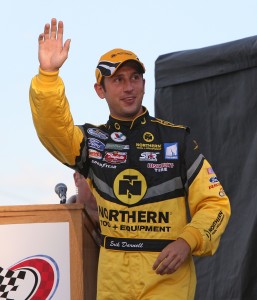 Erik Darnell has been on the sidelines all year because of a lack of sponsorship, but he's back now racing this weekend for Roush Fenway Racing in the No. 16. (Photo: Jonathan Daniel/Getty Images for NASCAR)

In his first season in the NASCAR Nationwide Series in 2009, Erik Darnell won a pole, finished in the top five twice and the top 10 three other times. And that was in a part-time role in 16 races.

Finally, he got the call from Roush Fenway Racing, and he'll drive the No. 16 Ford in Friday's Virginia 529 College Savings 250 Nationwide race at Richmond International Raceway. It'll be his first race since Homestead at the end of last year.

"That's not that long ago, right?" Darnell said.

He was kidding, of course. Ten months is an eternity for race car drivers.

"No, it's a really long time," said Darnell, who also will race at Dover and Texas later this year. "I'm really looking forward to it."

Darnell has been one of the forgotten drivers at Roush Fenway and in NASCAR, the victim of a changing landscape and a struggling economy. The 27-year-old from Beach Park, Ill., won a ride in a Roush truck for the 2006 season and did well in that series for three seasons, winning three poles and two races and finishing fourth in the 2008 standings.

But Roush Fenway had only a part-time ride available last year, with the "reward" of his good Nationwide performance a seven-race stint in Hall of Fame Racing's Sprint Cup Ford.

"It's just frustrating to get to this point and have it peter out like it has," Darnell said. "But that's kind of the way it is for everybody right now. It's not just for me. There's a lot of other young drivers out there who are very talented and given the opportunity could probably do well. But just like me, they're sitting on the sidelines, going, 'Hey, I want a chance to do this.' The opportunities are far and few between right now, unfortunately. ...

"We did have some really good runs last year (in Nationwide) and even had a couple more where we got wrecked running in the top five. I feel like the opportunity in the races we had in the Nationwide car, we capitalized on most of them and did a fairly good job."

Instead of Darnell, Roush Fenway began the year with Ricky Stenhouse Jr. and Colin Braun in full-time Nationwide rides, but Darnell is stepping in for Braun this weekend, and he's more than ready to show what he can do. Again.

"I've just got to go out there and pretty much run my tail off and show that I can still do this," Darnell said. "Having said that, if we've got a seventh-place car — the way the season has gone for the 6 and the 16 — we're going to have to take a seventh-place finish. I don't want to get in over my head and wreck one of these things. Those guys in the shop have worked really hard to put cars back together — and not all that was the fault of the drivers — but it's been a tough year for those teams.

"I kind of approach it as I've got to do the best I can for myself and for (sponsor) 3M and try to run my tail off, but I can't wreck the car at the other end of that. I just want to show that I can still do this."