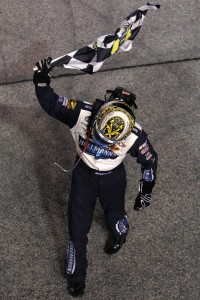 Driving JR Motorsports’ No. 88 Chevrolet, McMurray asserted his superiority over the final 40 of 195 laps to win the Nationwide Series Great Clips 300 at the 1.54-mile racetrack. The victory, the eighth of McMurray’s Nationwide career, was his first since November 2004 at Darlington.

Busch is tied with Sam Ard for the series’ single-season wins record with 10.

"We unloaded today and had pretty much the fastest car off the truck," McMurray said. "It was just pretty loose, and we just did a really good job of adjusting on it."

The good adjustments continued late into the race, McMurray said.

"At the end, Pops (crew chief Tony Eury Sr.) adjusted on it, and it was pretty fast, even on the short runs."

McMurray’s short-run speed proved decisive in a race that took a series of intriguing turns, including one sequence where only one car was scored on the lead lap.

Harvick took four tires under caution on Lap 62, while Busch and most other contenders chose to restart on old rubber when the field came to green on Lap 65. After restarting 12th, Harvick passed McMurray for the lead on Lap 70.

By Lap 112, he had the rest of the field at least one lap down, after Busch and other drivers on old tires came to the pits under green. Harvick gave up the lead to Busch when he made a green-flag stop for tires and fuel on Lap 120.

Harvick left the pits eight seconds behind Busch but cut that margin in half before Ryan Newman spun Trevor Bayne on the backstretch to cause the third caution of the race and bunch the field. McMurray was first out of the pits under caution and led the field to a restart on Lap 153.

McMurray stayed out front until contact from Stenhouse sent Reed Sorenson’s Toyota hard into the outside wall on Lap 168. Keselowski and 11th-place finisher Josh Wise stayed on the track under the caution, but they quickly surrendered the top two spots when the field restarted.

McMurray surged to the front with Busch in pursuit, but Busch was unable to make up significant ground in the closing laps and finished .286 seconds back.

"We just didn’t quite have enough there on short runs to keep up with them," Busch said. "Once we got about 25 or 30 laps on (the tires), we could really start reeling them in and pass them. Typically, it’s always a long-run car that wins here—Harvick beat me last year with a long-run car—but that wasn’t the case tonight."