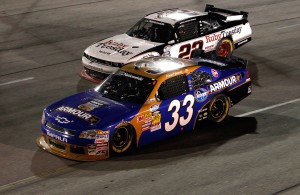 Kevin Harvick and Brad Keselowski put on a thrilling finish with Harvick holding on to the victory at Richmond International Raceway. (Photo: Todd Warshaw/Getty Images)

The victory was Harvick's third of the season and 37th of his career, third all-time in the series. The owner/driver for Kevin Harvick Inc. led 170 of the 250 laps and was elated with the progress his No. 33 team had made with the new car.

"This is the future of our company, so we put a lot of effort into this program, knowing that all the other cars were going to go away, and knowing that we had to be good with this car," said Harvick, who gets his new chassis from Richard Childress Racing and his power from Earnhardt-Childress engines.

"RCR's been a big part of this as well, with the engines, the chassis and the engineering. Everybody's been working together. It's easy when you get started in the right direction to keep it going that way."

Keselowski likewise was pleased with his No. 22 Dodge team's progress with the new car, which is being phased in this year — with plans for full-time use in 2011.

"I think that's something to be proud of for the series. I think we can continue to work and make things better, but this was a great start."

Denny Hamlin, Clint Bowyer, Paul Menard, Kyle Busch and Edwards completed the top 10. A snafu in the pits cost Busch a chance for a record 11th win this season. Under caution on Lap 205, the quick-fill nozzle on one of Busch's fuel cans broke off and remained attached to the car as Busch left pit road.

Penalized for taking equipment from the pits, Busch restarted 21st on Lap 211 and worked his way up to ninth before the race ended.