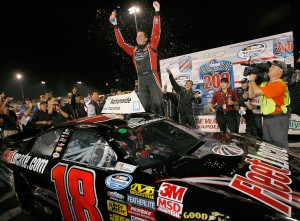 Sam Ard didn't do it. Neither did Jack Ingram. Or Dale Earnhardt Jr. Or Martin Truex Jr. Or even Kevin Harvick.

No, no driver in the 28-year history of the NASCAR Nationwide Series has won 11 races in a single season. But Kyle Busch could accomplish that feat in this Saturday's Great Clips 300 at Atlanta Motor Speedway.

Ard won 10 races in 1983, the second year of the series, and Busch matched that total in 2008. But no one else has won that many—until this year.

"It's pretty awesome," Busch said. "To me, it's cool to have the opportunity. We've got eight, nine, 10 more races left or whatever it is to get the opportunity to do it. Hopefully luck can fall our way and we can get No. 11. No. 11 is going to be pretty special because for one, it's never been done before."

But Busch has some other reasons to make breaking the record special. One is a member of the Joe Gibbs Racing team who has never celebrated in victory lane.

Sure, car chief Leo Thorsen has won races, lots of them. But the veteran mechanic prefers to avoid the picture-taking ceremonies after races. But after this season, Thorsen is coming off the road to spend more time with his family.

Busch, though, made Thorsen promise that he would go to victory lane should Busch break the Nationwide single-season record for victories.

"He was with Sam back when Sam won 10 so it's pretty cool to have him here now," Busch said. "Three seasons he's been able to do it."

Busch's next win also would bring him closer to Mark Martin's all-time series record of 48 victories. And remarkably, Busch's 40 wins have come in 193 stars, with 29 victories over the last three seasons, a total of 85 starts.

"I really like these cars," Busch said. "This car, I really like. It's fun, man. I've really grown accustomed to these things and learned how to drive them. You can really drive the Nationwide cars hard because they don't have a whole lot of horsepower so you can really try to make up a lot by being able to get more out of the car driver-wise versus a Cup car you'd have to slow it down and finesse it a little bit more."

There seems to be no slowing Busch down, at least not in the Nationwide Series.

Where: At Atlanta Motor Speedway