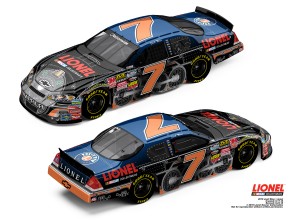 The sponsorship marks Lionel’s first foray into motorsports sponsorship and introduces the new company’s brand and logo to millions of NASCAR fans worldwide.

Lionel NASCAR Collectables, LLC is the new partnership between Lionel Electric Trains, NASCAR and the NASCAR Team Licensing Trust which will operate the die-cast motorsports replicas business. The new company is the premier manufacturer and supplier of NASCAR licensed die-cast cars and will proudly carry on the Action Racing Collectables and RCCA Elite Brands.

The new company’s primary logo is featured on the hood of the JR Motorsports No. 7 Lionel NASCAR Collectables Chevrolet Impala. In addition, the car features an orange No. 7 on the roof against a blue background, an echo of Lionel Electric Trains’ classic colors. The traditional Lionel logo and iconic ‘Circle L’ is featured on the rear deck lid. There are train elements emblazoned across the entire vehicle, most notably along the sides of the car where the actual tires blend in among the train wheels that are part of the paint scheme.

"Lionel is extremely excited to build on our 110 years of history through our new partnership with NASCAR in Lionel NASCAR Collectables," said Jerry Calabrese, CEO of Lionel Electric Trains and Lionel NASCAR Collectables. "When JR Motorsports approached us with the opportunity to sponsor Josh, we couldn’t think of a more natural way to introduce ourselves to the fans."

"Our No. 7 Lionel NASCAR Collectables Chevrolet is one of the coolest cars I’ve ever driven," Wise said. "I can’t think of greater opportunity for this No. 7 team than to get its first win with Lionel on board. For me, it’s an honor to be part of their initial involvement in NASCAR, and everyone at JRM is looking forward to this weekend’s race."