Share All sharing options for: Press release: Trevor Bayne braces for a solid showing in Atlanta 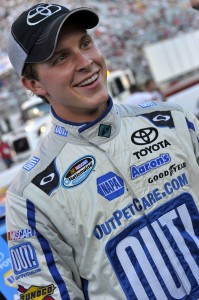 CORNELIUS, N.C. — It’s easy to forget No. 99 Aaron’s Dream Machine driver Trevor Bayne is 19-years-old. He acts and drives like a veteran but the Knoxville, Tenn., native showed up at Bristol Motor Speedway two weeks ago with braces. Since then the Diamond-Waltrip Racing driver lost 10 lbs. but still managed to score two top-10 finishes. This weekend Bayne visits Atlanta Motor Speedway hoping to continue his recent streak of good performances in the Nationwide Series. In the last 6 races, Bayne scored the fourth most points—the best of any non-Sprint Cup driver.

TREVOR BAYNE ON HIS BRACES:

"I decided to get braces because I had a small gap between my two front teeth. It was just something that had been bothering me for the last couple of years. Since I am in front of the camera a lot I wanted my teeth to be perfect. When the orthodontist told me it would only take six months I was all in. I have only had them on for two weeks and the gap between my two front teeth is almost gone. By this time next year I will have the best smile of any NASCAR driver."

WHAT HAVE YOU BEEN EATING SINCE:

"I have lost 10 pounds since I got my braces. The first couple of days my teeth were so sore. I pretty much lived off mashed potatoes and macaroni and cheese. Last weekend in Montreal was the first time I could actually bite down on food. I really didn’t think my teeth would be this sore. I just got them readjusted on Monday so I think I will be back to eating soft foods again this week. I am glad that I only have to wear them for six months and not a couple of years like a lot of people."

"Atlanta is probably one of my favorite tracks on the circuit. Last year we were really fast right off the truck. I like it because its really fast but the race track isn’t smooth it has it’s own unique characteristics I like how your car slide all over the race track. You really have to search around for a groove that has the most grip for your car. You want to get you car working good on the long runs. As the run goes on the less grip you will have. You have to be able to be able to carry a lot of corner speed and the car has to work good over the bumps."