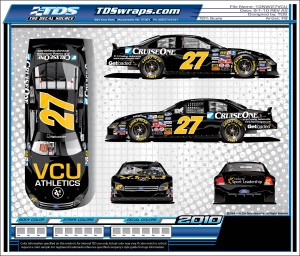 NASHVILLE, Tenn., (September 3, 2010) – Baker Curb Racing is pleased to announce that Virginia native Hermie Sadler will drive Baker Curb Racing’s No. 27 Ford Mustang in the Virginia 529 College Savings 250 at Richmond International Raceway on Saturday, September 10th. The Virginia Commonwealth University (VCU) Athletic Department and the VCU Center for Sport Leadership will serve as the primary sponsors on Sadler’s No. 27, with associate sponsorship from CruiseOne and Getloaded.

"Being born and raised in Virginia, it is always special to race at Richmond International Raceway; having the Richmond-based VCU Rams colors and logo on my Ford Mustang makes it extra special this time around," said Sadler. "Greg Biffle finished second in the spring race at Richmond behind the wheel of the No. 27, and Baker Curb Racing has proven all season long that they are one of the most competitive teams in the Nationwide Series. It’s going to be an exciting weekend, and I can’t wait to get on the track!"

"We’re extremely excited to partner with Hermie, Baker Curb Racing, and the CSL for this terrific opportunity for exposure and branding," VCU Director of Athletics Norwood Teague said. "Having a native Virginia driver sponsored by the state’s largest institution racing in the state capitol really makes this a special event."

Sadler will be making his 258th career NASCAR Nationwide Series start and 21st at the ¾-mile D-shaped track located an hour from where he grew up in Emporia, Virginia. His Nationwide Series resume includes two wins, three pole awards, and 44 top-10 finishes. He won the 1993 Nationwide Series Rookie of the Year Award and has finished in the top 10 of the series point standings four times (1993, 1994, 1997, 1998). In addition to being one of the most successful drivers in the Nationwide Series, the Virginia native has made 59 career NASCAR Sprint Cup Series starts and 13 in the NASCAR Camping World Truck Series.

In April, Sadler made his first Nationwide Series start since 2004 finishing 32nd in the Bubba Burger 250 at Richmond International Raceway. The veteran driver has also made four NASCAR Camping World Truck Series starts in 2010, finishing a season-best 12th in the Kroger 250 at Martinsville Speedway in March.