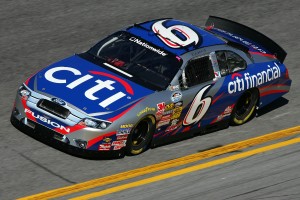 After considerable struggles earlier in the year, Ricky Stenhouse Jr. has consecutive top-10 finishes in the No. 6 car. (Photo: Getty Images for NASCAR)

The 2010 Nationwide Series season was supposed to be a coming-out party for Ricky Stenhouse Jr. Finally, with the season about over, the party is starting.

Roush Fenway Racing co-owner Jack Roush put Stenhouse Jr. and fellow rookie Colin Braun in full-time rides for this season, though both struggled at the beginning of the season and both eventually were benched.

Stenhouse Jr., though, has come back strong. Heading into this Saturday's Dover 200 at Dover International Speedway, Stenhouse has turned his season—and perhaps his career—around.

"That's two in a row for us, finishing in the top 10," Stenhouse said of recent finishes of 10th at Atlanta and fourth at Richmond. "I'm just thankful for Jack Roush staying behind me. We've been in and out of the car this year; it's been a tough year."

How tough? There were times early in the season where Stenhouse wondered how much longer he'd be employed. He crashed out of the first two races of 2010—and then things got bad.

Stenhouse didn't have a top-10 finish until the sixth race of the season, but the ninth-place run at Phoenix looked like a statistical anomaly. In the first 12 races this year, Stenhouse crashed out five times and finished outside the top 20 nine times.

After a wreck at Charlotte in May, Stenhouse was removed from the No. 6 Ford for two races. The time out of the car has seemed to do him well, as the second half of the season has been much better.

He finished third at Daytona in July, and then was ninth at Gateway, and 11th at O'Reilly Raceway Park. Then came a 14th-place finish at Iowa that may have been a microcosm of his season. Stenhouse Jr. crashed twice before the race and was forced to use teammate Carl Edwards' backup car in the race. Though his confidence took a shot to the jaw, Stenhouse rebounded with a solid run.

Then he was 13th at Michigan before the recent top-10 streak. It couldn't have come at a better time for him, since Roush Fenway is looking for sponsorship for the team for 2011.

Stenhouse should get an idea of how much he has improved with this weekend's event, for he was 18th at Dover in May.

"Dover is a mean place," Stenhouse said. "It's a fast track. I raced there earlier this year and learned a lot. We qualified in the top 10 and had a good race going until the end. We got a flat tire late in the race and didn't get the finish we deserved but we feel confident about going back there. ... I like high-banked tracks that are fast, so I am looking forward to going to Dover this weekend and tackling the Monster."