When contemplating Nationwide Series solutions, NASCAR should look to Montreal

Share All sharing options for: When contemplating Nationwide Series solutions, NASCAR should look to Montreal 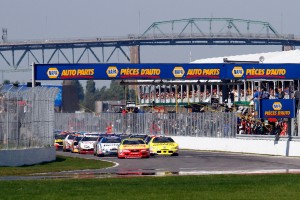 There’s no other city like it in NASCAR racing, and there’s no other race quite like the NAPA Auto Parts 200, which invariably reveals more twists and turns than the 14-corner road course that has hosted the Nationwide Series for four years.

"I’m going to find a nice steak, and I’m going to drink like hell and maybe French kiss a French girl," promised race winner Boris Said. "I think my wife will let me — once — because it’s Montreal."

Where else could you hear that sort of comment in a postrace news conference?

"This is one of the greatest places to go see a race — the town, the nightlife, the restaurants, the beautiful women," Said added. "And then you’ve got this great racetrack 10 minutes from nice hotels."

Based on crowd estimates, only four Nationwide races this year have surpassed Montreal in attendance: Danica Patrick’s debut race at Daytona in February, the April race at Talladega, and both races at Bristol.

It’s worth noting that all four were companion events to major Sprint Cup races at tracks that dwarf the seating capacity of Circuit Gilles Villeneuve, which is located on a small island in the middle of the St. Lawrence River, to which most fans travel by subway.

The bottom line is that, as NASCAR wrestles with the intricate question of how to maintain a separate identity for the series and still put fans in the grandstands, the sanctioning body can look north of the border to the archetypical stand-alone event.

The Nationwide question is NASCAR’s most difficult, as the number of possible scenarios that have been floated to teams and track owners will attest. Should the participation of full-time Cup drivers in the Nationwide Series be limited to a certain number of races? Should Cup drivers be ineligible for the series championship?

Track owners chafe at both notions, because the presence of Cup drivers builds attendance. The championship issue applies to two drivers, Carl Edwards and Brad Keselowski — the only two who are likely to do full-time double duty in 2011.

Races such as Montreal, however, could provide a de facto answer. If NASCAR can identify a sufficient number of markets that will support stand-alone Nationwide events and schedule races there, the logistics of competing in both series simultaneously become unmanageable.

Those markets are out there. Iowa Speedway (capacity 56,000) sold out its Nationwide race in late July. Kentucky Speedway drew 61,000 for its stand-alone event in June. An estimated 50,000 fans attended the inaugural race at Road America in Wisconsin, a conservative estimate by most accounts.

The problem won’t be solved effectively, though, until NASCAR addresses the competition side of the equation and provides Nationwide-only teams the means to run on equal footing against the derivatives of Sprint Cup powerhouses.

Said and No. 09 Ford owner Robby Benton struck a blow for the little guys at Circuit Gilles Villeneuve, but those successes are all too rare. At the same time, Kyle Busch held on to third place in the Nationwide standings — without showing up.

If there’s a way to limit the impact of Cup operations on companion Nationwide programs, NASCAR needs to find it, particularly as the Nationwide Series introduces its new car full time next year and Cup data becomes more relevant to Nationwide performance.

If that doesn’t happen, about all we’ll be able to do is look at each other wistfully and say, "We’ll always have Montreal."