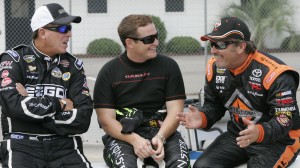 Ricky Carmichael (center) has been rubbing shoulders (and fenders) with Ron Hornaday Jr. (left) and Mike Skinner in the truck series, but he's getting the chance to race in the Nationwide Series this weekend. (Photo: John Harrelson/Getty Images for NASCAR)

One would think that nothing much surprises Ricky Carmichael anymore. After all, he is nicknamed GOAT, as in Greatest Of All Time.

But the 15-time American Motorcyclist Association champion was taken aback when team owner Steve Turner called to let him know he could be making his NASCAR Nationwide Series debut at Kansas Speedway this weekend.

Turner, who owns the team for which Carmichael and James Buescher drive in the Camping World Truck Series, was completing the purchase of the Braun Racing Nationwide team last week and needed a driver for the No. 10 Toyota.

"It has been really quick. Never expected it to come this quick," Carmichael said. "I got a call from our team owner last week, and he said, 'Hey, there's a possibility we might be able to run you in the Nationwide race next weekend in Kansas. Would you be up for it?'"

Carmichael chuckles when he thinks about how long it took him to say yes — about a second.

"First, I couldn't believe the things that I was hearing," Carmichael said.

"Yeah, no problem," Carmichael told Turner. "I'd love to, as long as it doesn't interfere with anybody else."

"I was like, 'Man, that's pretty awesome.'" Carmichael said.

Carmichael's move to stock cars came in 2008, when he raced in ARCA and the K&N Pro Series. He moved to the truck series last year and now will race in the Nationwide Series three times this year, including trips to Phoenix and Homestead later this year.

But he's never taken a lap in a Nationwide car. Needless to say, he's bent the ears of a lot of drivers, trying to inquire about what it takes to get a Nationwide vehicle around the track.

"I've talked to quite a few people about it," Carmichael said. "They explain things to you and give you a little bit of information here and there. You've just got to try to apply it when you get out there. Everybody's telling me all these things, but it's hard to grasp it until you get out there and drive the car."

Still, Carmichael is confident he can do it, though he'll take a cautious approach to Kansas.

"I'm going to go there and try to learn and not set the world on fire and let things come to me," Carmichael said. "I think I should be fine. I've been to Kansas before. It's one of the flatter mile-and-a-halfs. We'll just go there and do the best we can."