It's time to fly for Roush Fenway's Colin Braun

Share All sharing options for: It's time to fly for Roush Fenway's Colin Braun 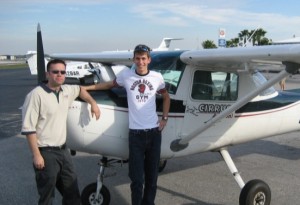 Pardon the pun, but NASCAR Nationwide Series driver Colin Braun finally has taken his passion for flying off the back seat.

After earning his pilot’s license in 2007, Braun’s racing career had derailed his opportunities to fly.

But because of his shared schedule in the No. 16 Roush Fenway Racing Ford, there’s been a bit more time for Braun to get back in the air.

Over the last two weeks, Braun has flown a four-seat Cessna 172 aircraft nearly a dozen times. With an instructor present, he planed to fly round-trip to Myrtle Beach, S.C., Wednesday.

"Getting back up in the air is something I've been wanting to do for a while now," Braun said. "I finally decided to make time and I've gone up almost every morning for a bit the past two weeks.

"I have to take what's called a 'cross country' trip which is something farther than a local flight, and I decided to head to Myrtle Beach. I've never been there so figured I'd go and see it."

He’ll get out of the pilot’s seat and back into the driver’s seat this week at Auto Club Speedway, where he’ll compete in his first consecutive stretch of races since August when he ran at Michigan and Watkins Glen.

The race at Auto Club also will be his second with new crew chief Chad Norris and the Roush Fenway Racing R&D crew with the No. 16 team. In their first race together last Saturday at Kansas, Braun finished 23rd. Norris and crew will remain with Braun this weekend.

This will be Braun’s second career series start at Auto Club. He made his series track debut in February and finished 18th. He also has two NASCAR Camping World Truck Series starts there with an average finish of 14.5.

This weekend also will mark the 50th series start at Auto Club for Roush Fenway Racing.